The iconic real-life fat actress and comedian Aidy Bryant along with co-stars Lolly Adefope, Ian Owens, and the rest of the cast are back for one final season of Shrill, a Hulu Original series that follows Annie Easton, a new journalist grappling with newfound adulthood responsibilities and a fat-phobic society determined to convince her she is not enough.

In ‘Shrill’ season one,

Annie’s self confidence fluctuates, as she works to assert herself. Throughout season one she often dresses in muted frocks, short dresses with high collars, long sleeves and lots of frills. As we move into season two, Annie’s wardrobe picks up with bolder patterns, colors and she begins to take risks in showing off her body in ways that make her feel confident, and reflect the transformation happening both inside and out.

Something ‘Shrill’ does exceptionally well is highlighting the experience of fat women and sex, we see Annie navigating various levels of comfort with her body while having sex, and we see her comfortably “on top” and bra-less, something Annie struggled with immensely early on.

Annie writes boldfaced, spontaneous articles about living as a fat person in a society that refuses to acknowledge or respect her, including an article about the effectiveness of the “Plan B” or the “morning after” pill on fat people – something that wowed and blew the minds of many viewers in season one.

She finds support in her roommate, a proud Black lesbian, Fran, portrayed by Lolly Adefope (Ghosts, Miracle Workers), who is navigating dating and societal fatphobia. Fran and Annie’s roommate-ship shows the power of solidarity and community among fat women, and their relationship continues to grow and deepen in seasons one and two.

Fran’s own wardrobe in seasons one and two is everything we love to see – bright and bold jumpsuits, a rocking three-piece suit for a wedding as well as form-fitting tops and wide legged pants in bold colors. Fran’s wardrobe is less about hiding or distracting from her fatness, but closer to a celebration of her gender and sexuality.

Season 3’s trailer leaves more than a few Easter eggs that have our anticipation building as the premiere date looms closer. You can watch the trailer here:

In the trailer we see a bold, newly single Annie embarking on a new frontier she has tip-toed around in past seasons: dating. We can expect with more going out and meeting new folks, that Annie will most likely be showing up in new outfits showcasing her new found security and confidence.

The season is also set to make more important statements as it has in the past, in the trailer we see Annie experience fatphobia in a medical setting, something inherently triggering to all fat folks alike, from a doctor that merely views her as a problem needing to be solved, rather than a human being. The word “gastric bypass” is mentioned, and overall this scene is set to make an impact with viewers.

We’re particularly curious about the subplot of Annie going to profile and interview “the separatist, racist whackjobs” – as is disclosed in the trailer. We wonder if Annie’s boss Gabe’s intent will be to give alt-right a platform to avoid getting “cancelled” for censoring the media, or how Annie’s voice will be interpreted.

It seems some form of hell will break loose, considering there is a screenshot of what appears to be Annie getting cancelled over the article she writes – which may or may not be related to the piece on the racist separatist family, including a headline reading “White Writer Buddies up to White Supremacists”.

Shrill has remained marginally passive in confronting the racism it’s main characters are experiencing, seemingly focusing on fat issues, dating, and respect – but for main character Fran, racism is ultimately at an intersection with the day-to-day fatphobia and homophobia she experiences as an out Black lesbian.

We hope to see season 3 Shrill be more vocal on this issue, and that they won’t miss an opportunity to call out bigotry.

Some other easter eggs: it looks like Fred Armisen (SNL, Portlandia) may have a cameo as a drummer in Gabe’s new band, possibly as their first official gig! The long-term comedian’s presence is sure to bring about some hilarious comedy, going hand-in-hand with the actor’s previous work Portlandia.

And perhaps most of all, we are SO EXCITED for Fran and Emily, portrayed by E.R. Fightmaster, (Work in Progress, Pathetic Woman) and their newfound relationship, falling-in-love and seeing the couple navigate important milestones like meeting the parents!

Fran’s settling down with Em begs us to wonder if ‘Shrill’ season 3 will include the ending of this iconic roommate-ship as the roommates branch out and into these new chapters of their lives. At the end of the day, we are sure to get an iconic fat fierce femme fatale moment of our favorites out at the club, in many ways reminiscent of the incredible pool party scene from season one.

Beyond that, what other “Keep Portland Weird” will the producers and writers have whipped up for their audience?

Some past highlights definitely included the nude cyclists’ group, who Annie covered for the calendar at the Thorn and looking ahead at the trailer, could “skirt-string-biter” be one of our new weirdos?

Shrill has become legend in the way it confronts fatphobes to their faces, and shows fat people existing, first and foremost as humans. The show has garnered national attention for its depictions of fat folks struggles in finding clothes that fit or fit them the way they feel most comfortable, and it has been an amazing two years of cheering Annie, Fran, Amadi and their friends on.

‘Shrill’ season 3 premieres on Friday, May 7 on Hulu!

Season three will bring a bittersweet end to a groundbreaking television show that for so many fat viewers has given an authentic platform for their real-life experiences that has set the bar for shows to come. 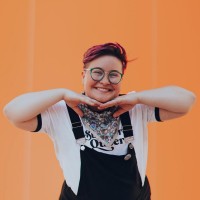 Liz (they/them) is a genderqueer bisexual based in the Midwest. They enjoy writing about internet culture and gender stuff, reading angsty LGBTQ+ YA novels, creating queer content and hanging out with cats. They have a newsletter called "The Gender Issue", and can usually be found tweeting about Steven Universe.