I’ve had a fear of losing my luggage when traveling since I was a child. As I’ve gotten older, I’ve realized that lingering fear isn’t about losing precious items as much as it is about the difficulty of replacing them.

Plus size women don’t have the luxury of finding clothing in their size in a hotel gift shop or even a local mall. Kristin Chirico, OG BuzzFeed content creator, is tackling this fear head-on with her new TV series, “The Empty Suitcase Show.”

In each episode of “The Empty Suitcase Show”, Kristin travels to a new city with only the clothes on her back. She has to rely on the retail stores in each destination to find clothing that fit her plus size body.

The first episode of “The Empty Suitcase Show”, premiered on December 7 at 8 AM PST on Facebook Watch and has more than 850K+ views and counting.

We caught up with Kristin to chat about her new show and what it means to her to be creating representation for plus size women in the media.

Get to Know the Woman Behind “The Empty Suitcase Show,” Kristin Chirico!

The Curvy Fashionista: Can you introduce yourself and give our readers a bit of background of the amazing work that you do with BuzzFeed?

Kristin Chirico: My name is Kristin Chirico, I am a video creator for BuzzFeed. I started as a writer, and then I became a lifestyle writer, writing about all sorts of, like, things about women’s fashion and also kind of the plus size experience. And then, very slowly through osmosis, I got pulled into the video side of the company.

TCF: How did you come up with the idea of doing “The Empty Suitcase Show”?

KC: So actually, Empty Suitcase is sort of a fusion of two things. One is that I was running into situations where I had to go to events or parties or stuff like that, and like, I was so annoyed that every time I had to, it was such a pain in the butt to have to come up with outfits. ‘Cause I have to order things online, try them on.

If they didn’t fit, it was like, ugh, I gotta send it back. It was like a whole process. And I remember thinking like, wow, if I lost my suitcase, I would really be in trouble.

The other thing that happened was that we had just finished filming our Ladylike New Orleans miniseries, and me and my co-executive producer, Mike, we’re like, walking through New Orleans, and we were thinking like, ‘wow, this was so fun to make.

We had such a good time making it. How can we make more travel content?’And then I specifically was like, how can I make travel content for plus size women?

TCF: You said this is also a big fear of yours, so what was the feeling like for the first time you got on a plane as a plus size person with only the clothes on your back?

KC: Honestly, the first time we ever shot an episode of this was last year. We went to Phoenix. I remember, I had like a plan in my head.

If worst comes to worst, we’ll cut some clothes, we’ll get some safety pins, we’ll say we could only find a shirt! We’ll go to Target!’

I truly was expecting catastrophe and disaster. I didn’t even think that I was gonna be able to find anything.

In my mind, I was like, ‘we’re gonna make on episode and it’s gonna fail horribly. I will prove my point and then we will move on and we will make other pieces of content.’

Loved this trip, thank YOU for loving this trip, and if you don’t know what I’m talking about the link is in the bio. And yes: we’re making another one in a different city!!! #plussizefashion #plussize #plusclothes #plussizeclothes #plusfashion #buzzfeedladylike

And then what unfortunately, and also fortunately, what happened was is that the outfits I came up with were so fun. And so cute and photographed so well that I was like, maybe this is one of those situations where like, I’m letting myself be surprised by what is possible.

It’s part of the drama.

TCF: I mean, maybe this is a spoiler, but is there any episodes where you don’t find anything?

So the way that I do the episode is I say, like, I try to find as much as I can at the store that we go to.

And if I can’t find it, I try to see how much I can supplementary shop at like, a Target. All of the stores that we’re going to in the U.S. are actually resale shops.

TCF: What is your goal in doing the show? What do you hope someone takes away from watching it?

KC: Honestly, I think that I made the show because I thought it was gonna be hard to do, and it is hard to do, but I think what I learned is that it’s also… If you put yourself out there and allow yourself to be surprised, sometimes great things happen.

Like, I think that I kind of always wanted to make an aspirational travel show for plus size women.

Did you know hot tub boats were a thing? Neither did I! Anyway, the Empty Suitcase premiere was in Seattle and we worked RULLY hard on it and the link is in my bio and @michaelrose17 is making me write all this ok bye

TCF: So in a way, the show makes plus size travel more accessible and kind of confronts some of those fears. Is that what you would say?

KC: Yeah. I mean, I would also say that a show like this is really only possible to make because I’m a size 20.

If I’m above a certain size, this show becomes almost impossible to make. And I think I’m very mindful of that, and mindful of the fact that being able to do this is a privilege, and having it be something that we can make beautiful outfits out of is a privilege.

But I think that, you know, fat women are kind of used to feeling like doors are sort of always shut in our faces when it comes to like, the fun, pleasurable sides of life.

So in my mind, I wanted to open that door just a little bit.

We shot the intro and the promo photos for The Empty Suitcase Show today. After, @michaelrose17 was like, you should get hot pix, you’ve already had your hair and makeup done. I was like I dunno I’ve been up since 7 AM and I feel like I’m melting. Mike took them anyway. Listen to your friends. (Dress by @uniquevintage)

KC: I think that they provide, you know, immediacy. Like, you know, straight size people can walk into stores and they can just buy things that they need.

They’re just like, I need a dress, so I’ll go to the dress store, and it’s not a thing!

And I think that having brick-and-mortar stores is such an important contingency in our lives and not relying on. You know, e-commerce, ‘cause I think that people think, oh, just order it online!

But being able to walk into a store and try on clothes and know immediately whether or not you want to buy those clothes, before you put down what could be a significant financial investment.

TCF: Is there anything else that you would like to add to let our readers know? Something that hasn’t already been covered?

KC: You know, this is a show about having fun and turning something that can be distressing into what may be a fun experience, and that’s what we really hope to do all along.

Watch “The Empty Suitcase  Show” every Saturday at 8 AM PST on FacebookWatch!

*This interview has been edited and condensed for publication * 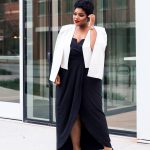