The Curvy Fashionista featured a first look at Ashley Nell Tipton back in February 2012 and the excitement of discovery then was much like what America is experiencing now seeing Tipton on Project Runway. While we’ve mostly watched Tipton design for straight size models, there’s no mistaking that she’s representing for all of us. 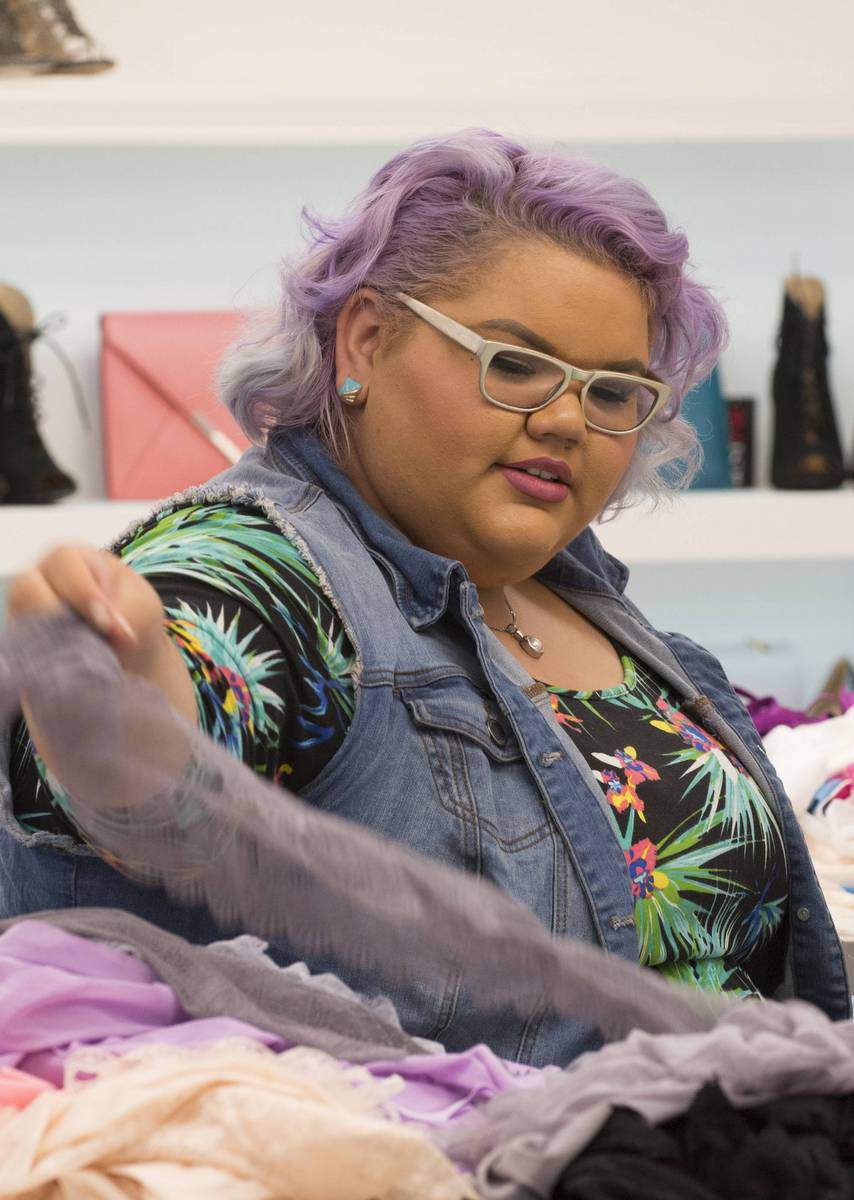 Tipton’s experience growing up plus size is sadly a relatable one. Tipton grew up getting bullied for her size and middle school in particular was a challenge for her.

“I was constantly bullied from kindergarten all the way through high school,” says Tipton. “I had a really tough time in middle school. I was threatened with scissors because someone didn’t like me because of my size. It was just one extreme to the other. I would go home crying and not want to go back to school the next day.” 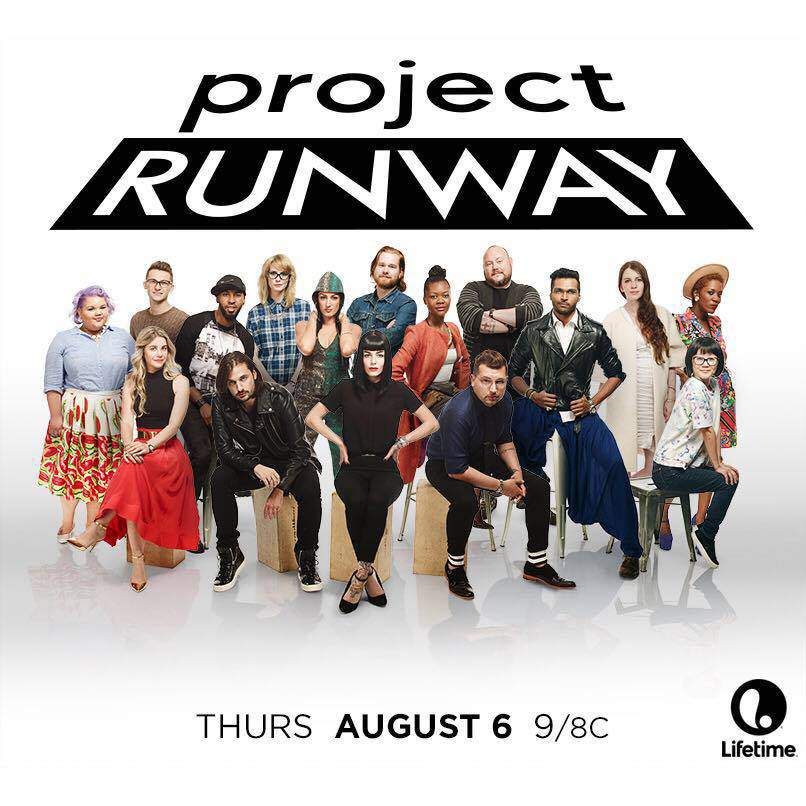 Things got better as Tipton entered high school and she started working at Torrid. Her grandmother had taught her to sew and every time they were together, they were creating something. When she had to declare a major in high school, fashion design felt like the natural fit for her background and work experience. And she went right onto studying design in college. Although many design schools do not feature any education specifically on plus size fashion, Tipton was set on making this a part of her college experience.

“My professor taught me how to do everything and helped me figure out to do. She helped prepare me on everything I needed to know and it all made sense to me because I am my customer. It made it easier knowing what I wanted.” 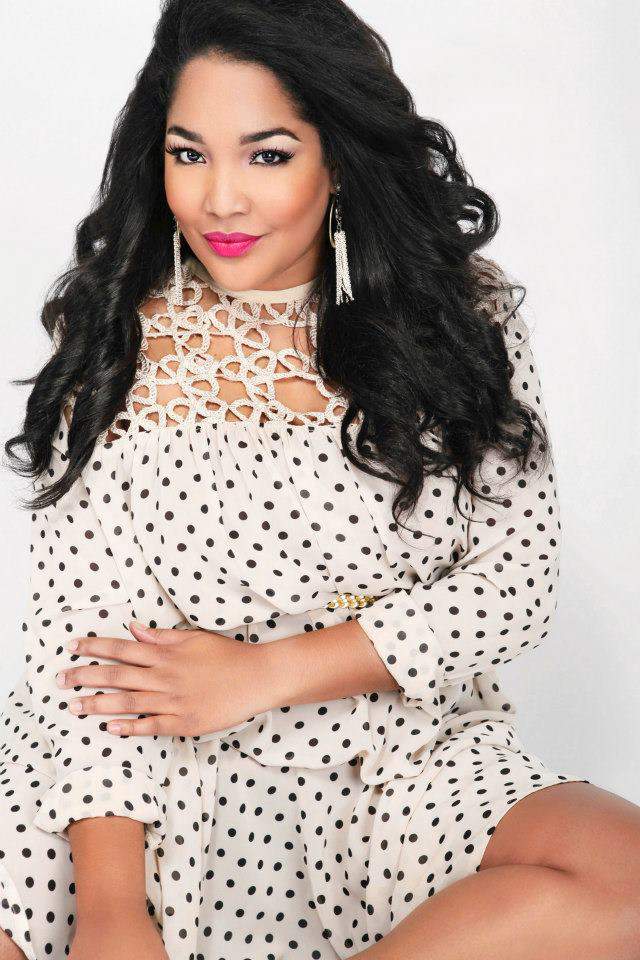 Tipton would go onto show at Full Figured Fashion Week in 2012 to rave reviews. And as someone who at just 24 years old has a wider knowledge base than many of these mainstream brands just now expanding to plus, Tipton says she’s happy to see the industry’s growth and change since she first started out. But she’s also ready for brands to pick up the pace.

“I do feel like plus size fashion is changing but it’s slowly changing. It’s not growing as fast as we would all like,” says Tipton. “We want clothing that fits us right and shows our personality. I feel like it’s going at a pace where society can handle it.

I feel like now that I am in the picture and Tess [Holliday] is in the picture, we are getting more attention. But we need more clothing for women that are past a size 20 and not just up to a size 18. When companies are jumping on the bandwagon to do plus size, they limit themselves.”

In her assessment of the limitations of the plus size industry’s growth, Tipton hits on exactly why an independent designer like herself being thrust onto a major platform is such a big deal. Although Tipton’s online store is closed at the moment, her size range was always 1X-6X and she says will continue to be when she re-opens. She wanted to make her items accessible to as many people as possible and being her own boss, she had no one telling her not to.

Another thing that Tipton did that many brands have still yet to do is work with a model above the plus size standard: herself. When Tipton modeled the pieces in her own shop, she wanted her customers to relate to her and feel a personal connection. She says she always received positive feedback about it.

And now that Tipton is on Project Runway she’s getting a lot more of that positive feedback. When it was first announced that Tipton was cast on the show, I remember seeing the news spread like wildfire. They were still filming the show when it first announced so Tipton herself didn’t get to witness the madness but when she got her phone back two weeks later, she was overwhelmed by the response.

“The day I got my phone back after filming, I couldn’t even reach the end of my wall on Facebook,” says Tipton. “It was just insane. I felt so much love and it literally brought me to tears. I didn’t realize how much of an impact I would be making. So many people told me when I got on the show, ‘Ashley, do you realize what you are about to do and how your life is about to change?’ I was like, ‘No, life is going to be the same.’ I just didn’t want to bring myself to reality. It blew my mind to see how much people were impacted by it.”

While Tipton has made it clear that she wants to be America’s best plus size fashion designer, there’s certainly a freshness to what Tipton does that spans a full spectrum of sizes. The show has had some high points for Tipton including wins on the first and third challenges. She also received high praise on the unconventional materials challenge that she says was her favorite where she made a dress completely from old polaroids.

But her experience has had some lows including the team challenge in episode five where Tipton was picked last after coming off of a challenge win. Watching the contestant pick was painful as a viewer and it even caused host Heidi Klum to step out of a character to express her disappointment. 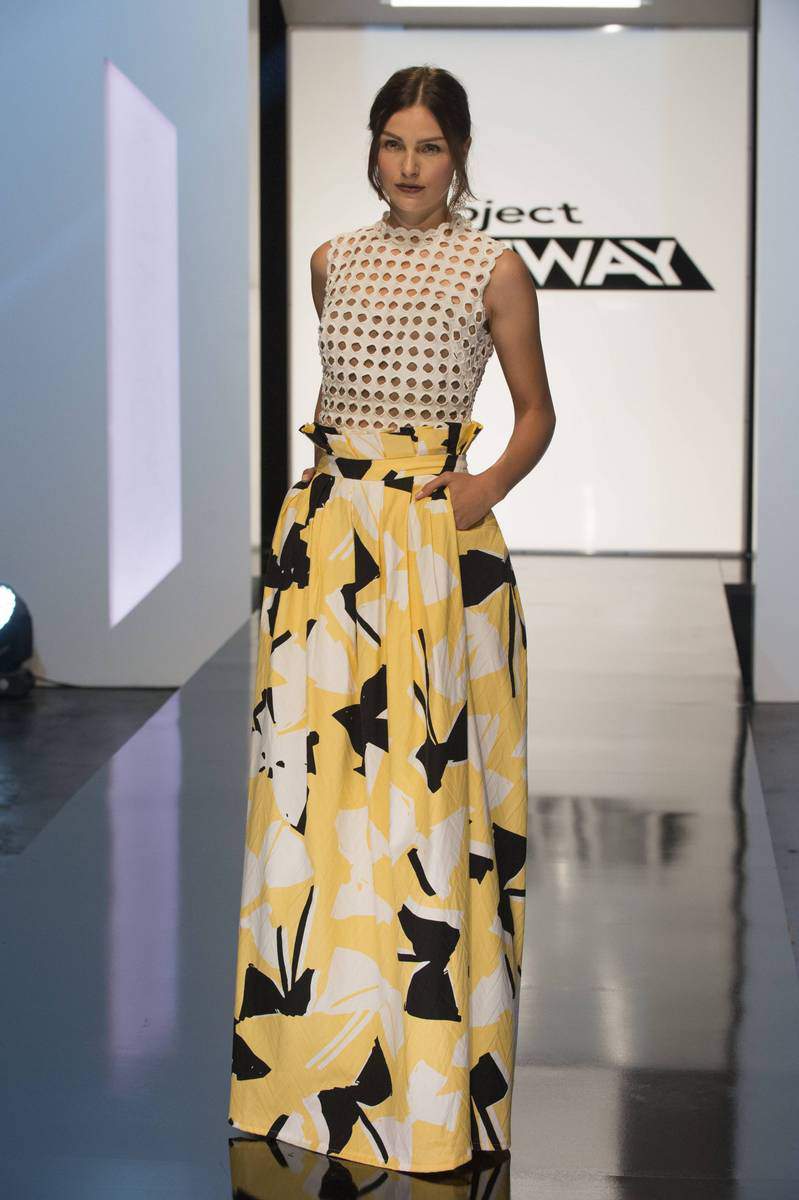 “I just wish that these girls would realize I’m not trying to stir the pot in any way,” says Tipton. “You have a person who is on the outside looking in and it’s exactly what it looks like but it was never a wake up call to them. They just continued to be the way that they were. I never got my voice heard and they were just not accepting. They were talking over me and being just plain rude.”

While Tipton says the girls came up to her after the critique and said that they weren’t being mean girls, she also says  they never really apologized or made an effort to build a relationship with her as the show continued. Tipton says this experience really demonstrates that the show is not scripted. Another thing we’ve seen as viewers is Tipton struggle with her own self doubt.

“People have to understand how stressful this competition is,” she says. “No one will ever understand what us designers have to go through. We are fighting for our lives. Everything depends on this. You’re constantly doubting yourself no matter how secure and confident you are, you are always going to have some doubt in yourself.

You never know what the judges want and you are competing against all these other really talented designers. You are mentally and physically exhausted and no matter what you just want to win this. You are starving for it. It brings out every emotion possible. I feel like Project Runway holds all of my emotions, good and bad.” 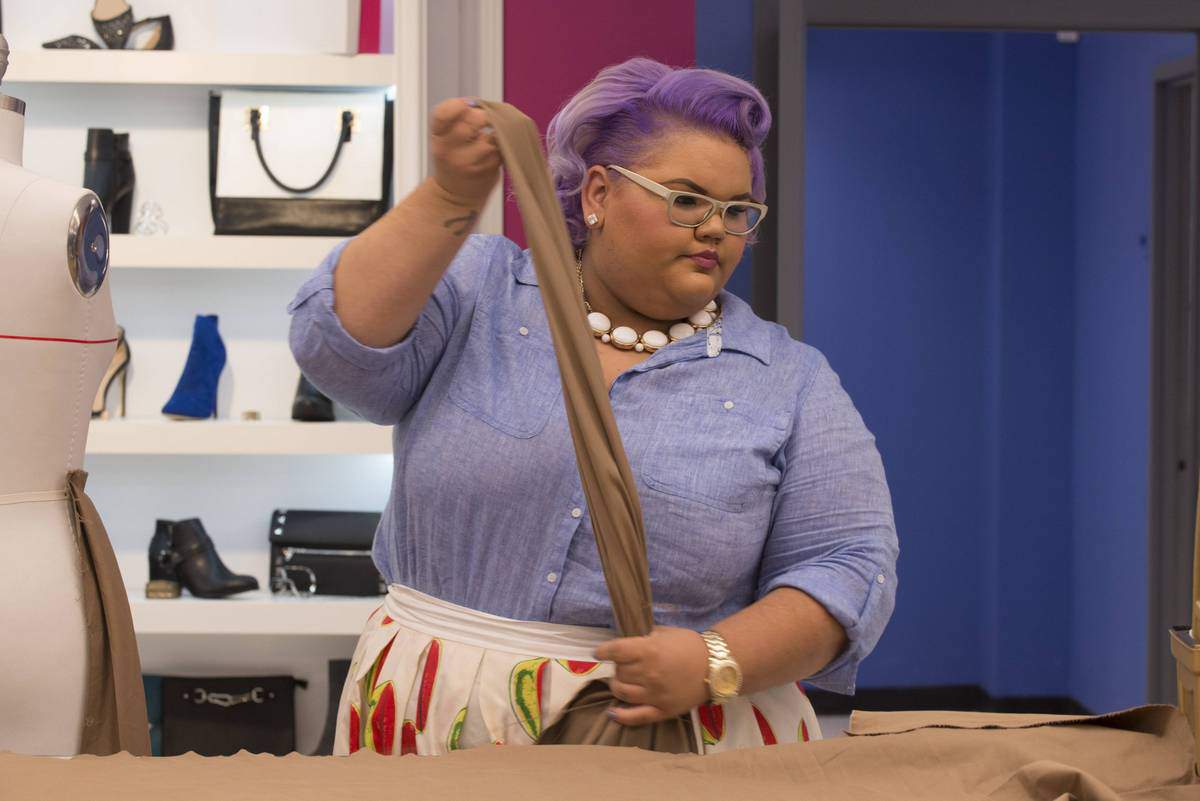 And as the finale episode itches closer, plus size viewers are hoping that we get to see Tipton crowned as the winner. Although many speculated that plus size collection that came down the Project Runway show at New York Fashion Week was Tipton’s work, Lifetime cannot confirm any of the designers who showed at fashion week at this time.

What we can confirm is Tipton is still the force of plus size fashion that we’ve known her to be and after the show, we can expect a rebranding and website facelift for her online store. Items will still be available up to size 32 and Tipton hopes that she will be able to move away from made to order items and get her pieces in the hands of more consumers.

“Life has been overwhelming for me and getting all this attention is not something that I’m used to and I just don’t want to crash at any moment because it’s too much,” says Tipton. “ I just want to take my time and be patient with myself. I want to take it all in and appreciate it.” 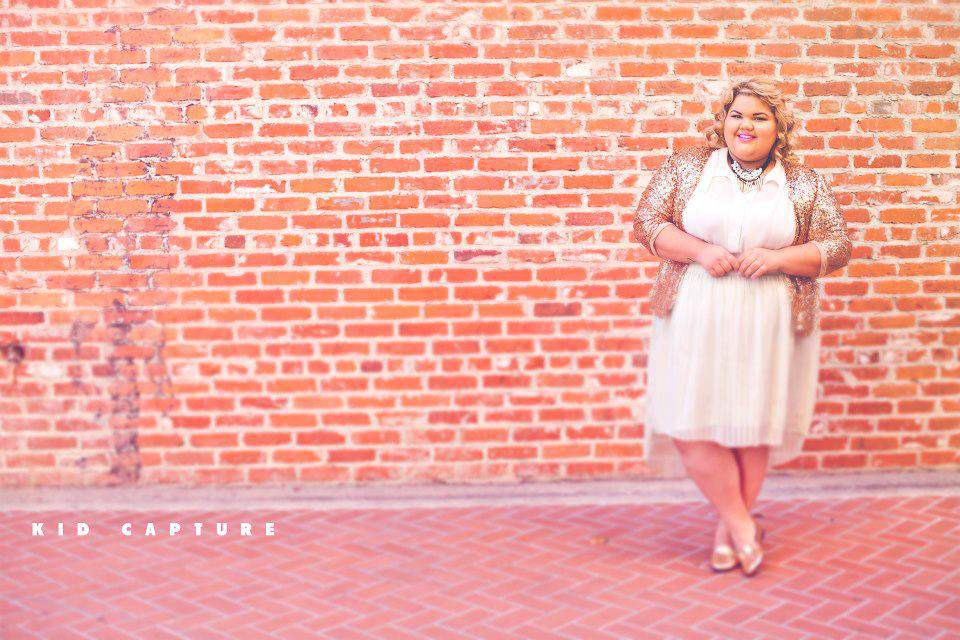 Win or lose on Project Runway, Tipton’s visibility as the show’s breakout plus size designer has already helped put plus size fashion on the mainstream map.