Over the past week, there have been various conversations about what Body Positivity is and is not. There were a series of twitter threads celebrating bodies that are already celebrated by our society at large. Teen Vogue released this graphic on body positivity and about how it’s not “just” for fat women but “all bodies.”

It began as a political movement to bring health care to people of size, to stop discrimination against fat bodies, and to challenge the systematic oppression that fat people faced and still face to this day.

Listen, body positivity was and is still political. It was never about self-love, although that seemed to be an added bonus.

Shockingly enough, it seems as though when people respect your body, you’re more likely to love it, who would’ve thought?

The Impetus of the Body Positivity Movement

The body positivity movement was built by black and brown fat women who were fashion bloggers, who dared to be themselves. Who dared to carve a space for themselves in a world that was not built for them.

The women who led and carved out this movement with their bare hands wanted to create a space for themselves.

They made blogs, instagrams and other forms of social media.

They created community where fat babes could go and realize that they were worthy of respect.

They broke down the barriers that society had placed in front of them.

But this creation and curation of space is sparingly found in online mainstream body positivity today.

The movement is no longer a movement, just a hashtag for straight-sized able bodied white women to post their gym selfies and their meal prep for the week. Stripping away the radicalization of loving and respecting your body in a society that tells you not to.

The body positivity movement has pushed out the fat people who made it possible in the name of everyone.

It has forgotten its roots.

So where do we go from here? Do we accept that body positivity has de-centered the very people who built the movement? Or do we continue to push back and fight back until body positivity is once again synonymous with fat liberation?

If you are a thin person who wants to be a part of this movement, I have some questions for you.

Do you challenge diet culture and fatphobia in your own life? Do you recognize that “thin shaming” is not the same as systematic body oppression that fat people face? Do you make space for fat bodies and voices?

Did you know that it is legal to fire a fat person for being fat in 49 states? Do you participate in diet culture but call it a lifestyle change? Do you post and deal with before and afters? Do you say that you feel fat even though we know that fat is not a feeling?

Are you an ally, or do you want feel good points?

Stop pushing fat people out of spaces that they created.

Take obese out of your vocabulary. Read up on fat liberation and politics. Follow fat people on social media.

Listen when people are talking about body oppression and fatphobia. Unpack your own demons and don’t make the fat people in your life do it for you. Realize that systematic fatphobia is actually killing people.

Read up on diet studies and realize that 95% of diets don’t work and we don’t really have control over our bodies, so stop blaming fat people for being fat.

Understand your privilege and use it for good. Stop de-centering fat people from these conversations about bodies because they are the most affected. 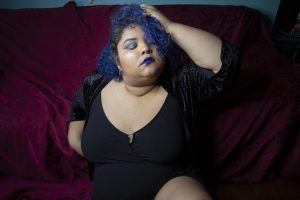 Jude Valentin (she/her & they/them) is a content creator, photographer, and body positive activist who spends her time educating, uplifting, and creating space. She is well known for her #notyourbefore hashtag, and you can catch her on her Youtube channel twice a week.