This time a year ago we asked the question “Is PETA Guilty of Fat Bashing?” Has anything changed in the time since?  Not really when you read news reports like the one that happened a few days ago in Canada.Â “Montreal night club Muzique ‘No Fat Girls’ size discrimination? No, says club management, who claim the offensive language was pulled immediately after a party event and before anyone complained, according to Canadian news reports.  Club Muzique had posted a birthday party invitation for one of the club partners on their Facebook page that included the words “NO FAT GIRLS ALLOWED!!!!!” Source

The club is trying to back track saying they had no control over the content of their Facebook page and the comment came before they knew what was going on and the party had already happened.  The problem with this is that as a business regardless of your location in the world it is about how those outside your business perceive you and how you operate.  If the ad copy for your events, be it official or unofficial such as what is common on social networking sites, sends the wrong message regardless of what you say it will be viewed as a negative thing.

Critics will say that we are just hallucinating and that we should just push the plate back and just say no.  Like I previously stated sizim is very real to a young lady who is told she would be so much more pretty if she lost a few pounds or the man being told he is nice but not nice enough to date because he is to big. In the fashion world we have the Karl Lagerfield’s, on the news we have Mimi Roth, not to mention PETA all doing an end around by saying they are looking out for peoples health and well being.  If that was the case why such negative rhetoric.

What do you think?  Is size discrimination real or just in our heads.  This is my last day filling in as the Curvy Fashionista and while this has very little to do with plus-size fashion I always like to give readers something to think about. Marie will be back with you full time soon.  Be sure to visit me sometime over at Full Figure Plus and let your regularly scheduled blogger know that you missed her while she was gone.  Also tell her that I did my best not to break anything while she was gone. 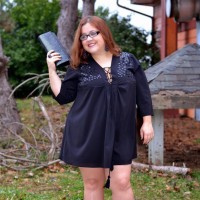