In 2017, plus size fashion remained on the rise as more stores launch plus size options. We saw designer collaborations between major brands such as JCPenney, Target, New York & Company with straight size celebrities including Tracee Ellis Ross, Victoria Beckham and Eva Mendes that all offered plus sizes. But once again 2017 proved that plus size babes aren’t just fighting to be included in existing mainstream fashion. They are creating their own path and challenging society’s boundaries placed upon larger bodied folks. As we begin counting down towards 2018, let’s look back at this years biggest news for the big girls out there.

This year, we saw bloggers launch their own influential clothing lines and collaborations. Models stood up to their bullies both online and in-person. And we watched as fat girls traveled around the world.

Brands also took some big steps this year sending more models down the runway for New York Fashion Week than ever before. An online fave opened retail stores and one of TV’s biggest fashion-focused shows included plus size models. Let’s take a look at all the moments that made 2017 a year for the books.

I can’t tell you how many times I tried to get out of gym class because of my period. I used every trick in the book – all of which became ineffective when I went to an all-girls high school, but I digress. But, really – why was I SO afraid to go to gym class? I mean, let’s keep it real – cramps are not a joke and there were surely days when I would’ve rather lounged on the couch with random daytime soap operas instead of trying to duck out flying dodgeballs. But I think there were other reasons why I tried to get out of class. I mean, what if my tampon string dangled out of my shorts or something? What if I bled through my pants and everyone in my gym class knew that I was the kind of person who bleeds from their uterus? But…doesn’t everyone have that fear? And furthermore….don’t most uteruses bleed? Maybe not all of them, but definitely most. Plus, isn’t there a special kind of camaraderie in knowing that we’ve all had the same fear? @ubykotex is dedicated to releasing the stigmas of periods + exercise – share YOUR story using the #FindYourFITNESS hashtag and get a free sample of NEW U by Kotex® FITNESS* tampons, pads and liners with the link in my profile! #ad #FindYourFITNESS

In April, U by Kotex launched its partnership with fat femme, body positive yogi and author, Jessamyn Stanley. The partnership came with a commercial showing Stanley practicing yoga and put this plus size woman of color on a national platform. Thus challenging stigmas both about periods and also showing that health and wellness doesn’t come with a size limit.

When activewear powerhouse Nike launched plus sizes back in early 2017, Chicago blogger Hayet Rida was one of the first to style the new offerings. Rida represented for plus size babes as part of the #AirSocietyCHI. And in September, she hosted Nike’s first plus size event putting the brand’s mission into action: “if you have a body, you are an athlete.”

It's official—our first permanent store is now open and we want YOU to see it first! Tune into our Live stream here on Instagram at 1:00pm EST to tour the new store with our friend @blonde_inthedistrict! She'll show you the new layout, our #XOQ wall, new styles, and much more! ?? And, if you're in the DMV area, be sure to join us this weekend for Tax Free Shopping (and champagne!)—we're on the second floor in the Fashion Center at Pentagon City! ??

There’s no doubt that ELOQUII has been dominant in the online plus size fashion sphere since its re-launch in 2014. And 2017 expanded the ELOQUII shopping experience from strictly virtual to an integrated brick & mortar shop. The first store opened in March as a temporary pop-up just outside of Washington D.C.. It was so successful that it became a permanent tennant. Pop-up stores in Chicago and Columbus followed suit. With blogger collaborations and in-store events, ELOQUII’s stores have become a gathering place for the plus size community.

In June, blogger Corissa Enneking of the popular blog, Fat Girl Flow, released a new line of merchandise.  One shirt emblazoned with the words “Fat Bitch” quickly became popular as a way to reclaim the once hurtful phrase. The original Fat Bitch tee was white with red writing . It’s now released in multiple color options including black, pink and a more PG “Fat Babe” version. The tee has been worn by everyone from blogger Gabi Gregg to yours truly in an epic photoshoot during NYFW with fellow fat babes Natalie Hage, Margot Meanie and the shirts’ creator, Corissa all shot by Rochelle Brock.

Blue and green should always be seen, so says @archedeyebrow. Shop her collection via the link in our bio right now ?? #navabi #plussizefashion #archedeyebrowxnavabi #moreplusplease

A blogger of six years, Bethany Rutter of Arched Eyebrow was the first plus size blogger to launch a collection with the popular UK brand, navabi. With the largest collection of plus size brands, navabi’s first partnership with a blogger is a big deal. Rutter’s nine-piece collection featured boldly-colored simple statement pieces. Rutter’s collection marked the first of three influencer collections launched or in the works for this body positive brand.

HEY! YOU THERE! take two seconds and leave me a comment below telling me ONE WORD you’d use to describe yourself. me? i’m a fighter. i take on so many challenges in life, some of which i asked for and some i didn’t. either way they come to me, i make sure i prevail over them. it’s an absolute honor to join other wonderful people in @jcpenney’s newest #HereIAm campaign. to see all the magic, click the link in my bio (??). you’ll see so many faces you love telling their story! @jcpenney never ceases to amaze me on how important body diversity is to them. they make me feel included and seen and their pieces are beautiful, trendy and affordable. we are limitless and unique and our clothing options should reflect that, right? we deserve it and @jcpenney knows we are SO worth it. #ad

Back in July, model Natalie Hage was on an American Airlines flight to a shoot in Los Angeles when she noticed the man sitting next to her was texting his friend insults about Hage’s body. Being body shamed on a plane is sadly nothing new for most plus size folks but Hage’s response to the body shamer took the world by storm. In a video that she recorded on her phone, that garnered millions of views and 4,000+ shares. Hage confronts the man about his comments telling him, “My body is none of your business.” The confrontation landed Hage interviews with Today, CNN, ABC News among others. This sparked an important conversation about the fat shaming on planes that usually goes unchecked. This certainly opened minds to the treatment that plus size folks endure in daily life.

Never thought that breaking rules would make us feel this good ???

Two of plus size fashion’s most seasoned bloggers, Nicolette Mason and Gabi Gregg, teamed up to launch Premme, their own clothing line for sizes 12-30. When their site went live back in July, plus size babes flooded the site to purchase actually causing it to crash. It was clear that these bloggers’ eye had hit on what the plus size community had been looking for. Some statement pieces in interesting cuts and standout fabrics available in extended sizes and shown on visibly plus size models. Since its launch, Premme has continued to release swoon-worthy collections solidifying its place as an important player in the plus size fashion game.

One of fashion’s biggest shows, ‘Project Runway’, made a major shift when they announced that models sizes 0-22 would be appearing on weekly challenges. Designers were expected to design for this full size range during each challenge which was a huge shift. Although the show mostly ignored size diversity save for oft-bemoaned “real woman challenge”. Ashley Nell Tipton’s winning NYFW show back in season 14 proved that plus size fashion deserves a place on fashion television’s mainstage. One of the models who appeared in that season 14 finale show was Liris Crosse who also regularly stole the show during season 16 alongside plus models Jazzmine Carthon and Monique Robinson.

Well today was interesting. Thank you for having me @britishvogue #watchthisspace

UK-blogger Callie Thorpe was surprised when a reader first told her that she had been featured in a Miss Vogue article on bikini trends worn by Instagram celebrities. Thorpe appeared in the article alongside the likes of Kendall Jenner, Bella Hadid and Selena Gomez. Thorpe was proud to be featured but the vitriol comments that ensued quickly clouded that high. The pushback to Thorpe’s inclusion became national news. Thorpe decided to express the pain these comments caused her and challenge media to better moderate online abuse in a 19-minute heartfelt video. The response sparked an important discussion and landed Thorpe on national news discussing online fat shaming. She also received an invitation to Vogue House to meet with the magazine’s editors who supported her during the experience.

As Hage’s plane confrontation proved earlier in the year, travel is not always easy when you’re plus size but it’s certainly not impossible. And that’s exactly what Annette Richmond’s Fat Girl Travel movement celebrates: fat babes living their best lives through travel. The private Facebook group provides a safe space for plus size folks to discuss their fears and receive encouragement from others. While the public Instagram shares images from the Fat Girl Travel community proving that fat girls are going places!

New York Fashion Week Includes Most Plus Size Representation Ever

New York Fashion Week hasn’t been known for being inclusive to all sizes but in September, two plus brands: Torrid and Addition Elle both sent all plus size models down their Spring/Summer 2018 runway. In addition, size inclusive designers such as Chromat and Christian Siriano continued to include a range of sizes in their shows. In total, plus size models made 90 appearances on the runway; a major shift from Fall 2016 when only four plus models appeared. Between the runway shows and parties, NYFW was the place to be for plus babes this Fall.

And these aren’t even allll of the highlights of 2017! Whether it is blogger Chante launching One Curvy Boutique, Haute & Co Bridal inking a deal with People TV, 2017 has seen it’s share of amazing plus size fashion strides.

Whether on the runway or on a plane, if 2017 showed us anything, it’s that the plus size community is going to keep using our voice to make major waves.

What were your highlights of 2017 for plus size fashion? 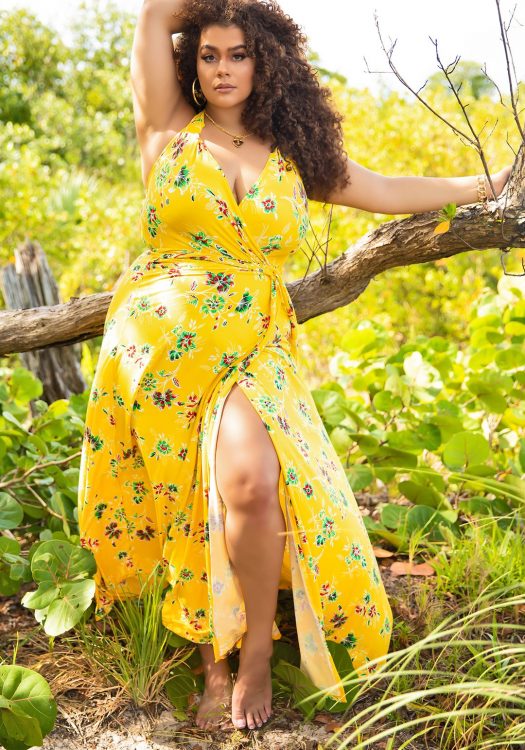 Are you looking for something comfortable AND fashionable to slip into this summer? We’ve got 7 plus size wrap dresses that you’re sure to turn heads in!