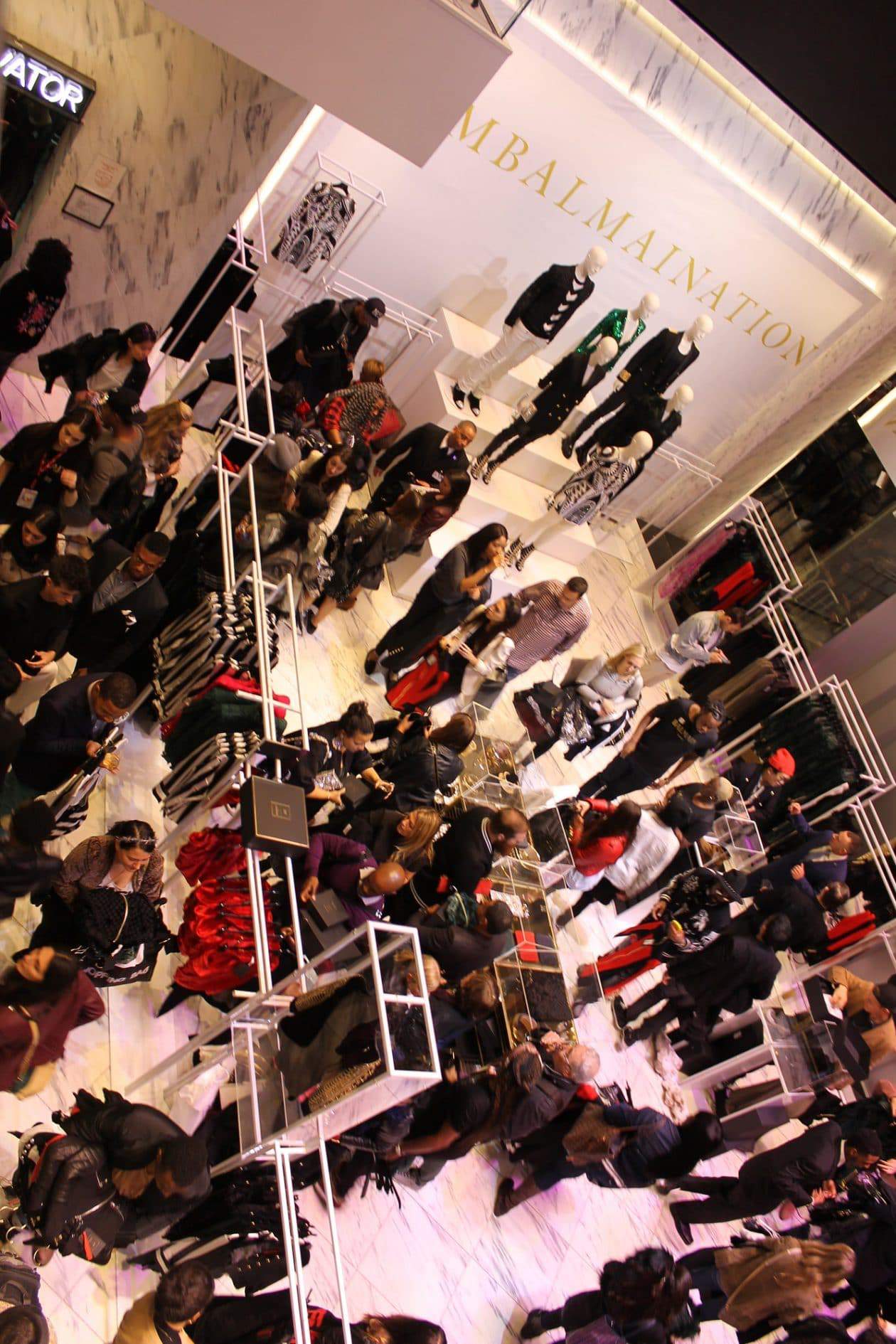 November 5th was the launch of Balmain for H&M, and it was as bloodthirsty as a Best Buy Black Friday sale. In major cities across the world people clawed, shoved, and mowed down H&M employees in order to snatch a piece of the coveted collection, and the private shopping event I attended was just as uncivilized.

On Wednesday, November 4th, I, along with a few hundred other lucky writers, bloggers, editors, stylists and the like, lined up three levels thick to attend the private night-before event. Although these people work in the same industry, and often with each other, you’d think they’d have more restraint. But no, apparently deep down inside many people will throw a punch just to get their hands on a piece from an H&M designer collaboration.

Although many still believe in being “fashionably late,” this was not a time for such frivolous ideals. When I arrived more than an hour early to the invite-only event, there was already a line about 30 people deep, with a barricade separating those invited to the party from those who were camping out overnight on lawn chairs. 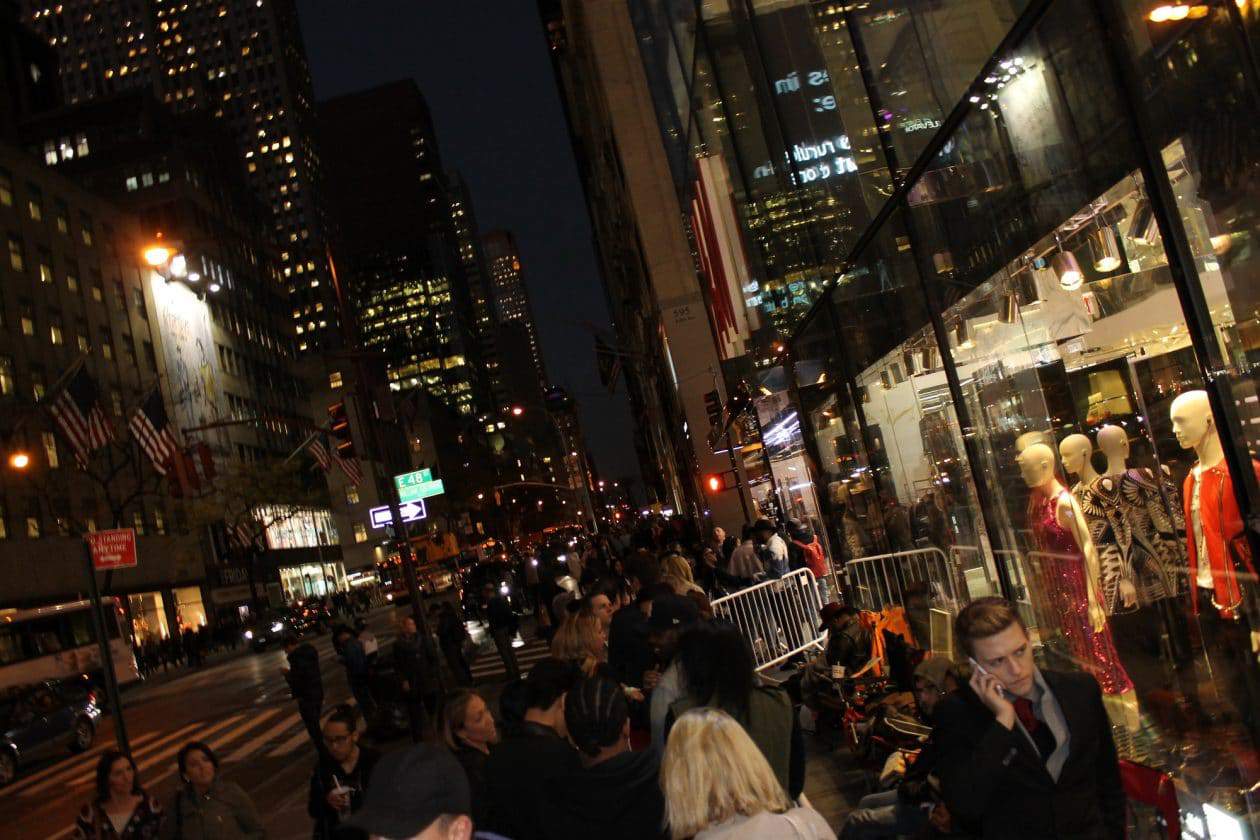 At the event’s start time of 6:30 PM, you could feel the tension rumble through the now two-level-thick line, as invitees shifted anxiously and began to inch forward into the person in front of them. And then we were off! The doors were flung open and the first group of people were permitted in; rushing forward, arms outstretched, hands clawing to grab literally anything and everything from the racks. The two items per style rule clearly gone from their minds, they feverishly cleared out entire racks before I even stepped foot into the store.

Fights broke out. Punches were thrown. Grown women and men played tug-o-war over the same bead-encrusted jacket. H&M employees were pushed, garments ripped from their hands as they attempted to re-stock the quickly emptying racks. Teams of people piled their purchases and sat on them, sartorial chickens waiting on their Balmain x H&M eggs, cawing at anyone who dared to come too close to their goods. 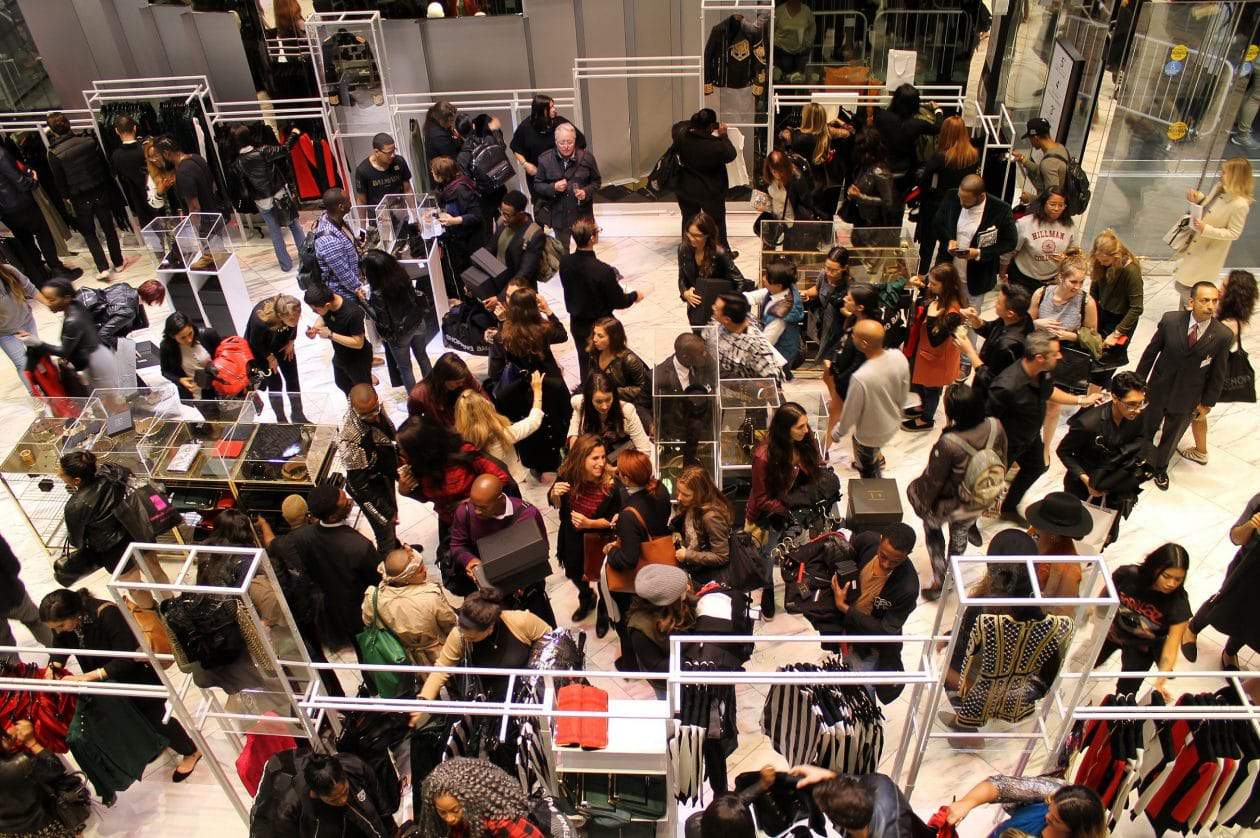 With empty racks and screaming patrons surrounding me, I grabbed a box of the gold-plated headphones and attempted to flee the fray. As employees re-stocked, my friend dove into the crowd, emerging with a few items, including a black-on-black Balmain logo t-shirt for me. We waited on the sidelines as more employees re-stocked, and when I saw one stressed employee carrying the leather hoodie I was hoping to purchase, I approached him slowly and asked nicely if I could have it. He seemed so taken aback that I actually politely requested it, that he handed it over to me with a huge grin on his face, before taking off to the stock room again. 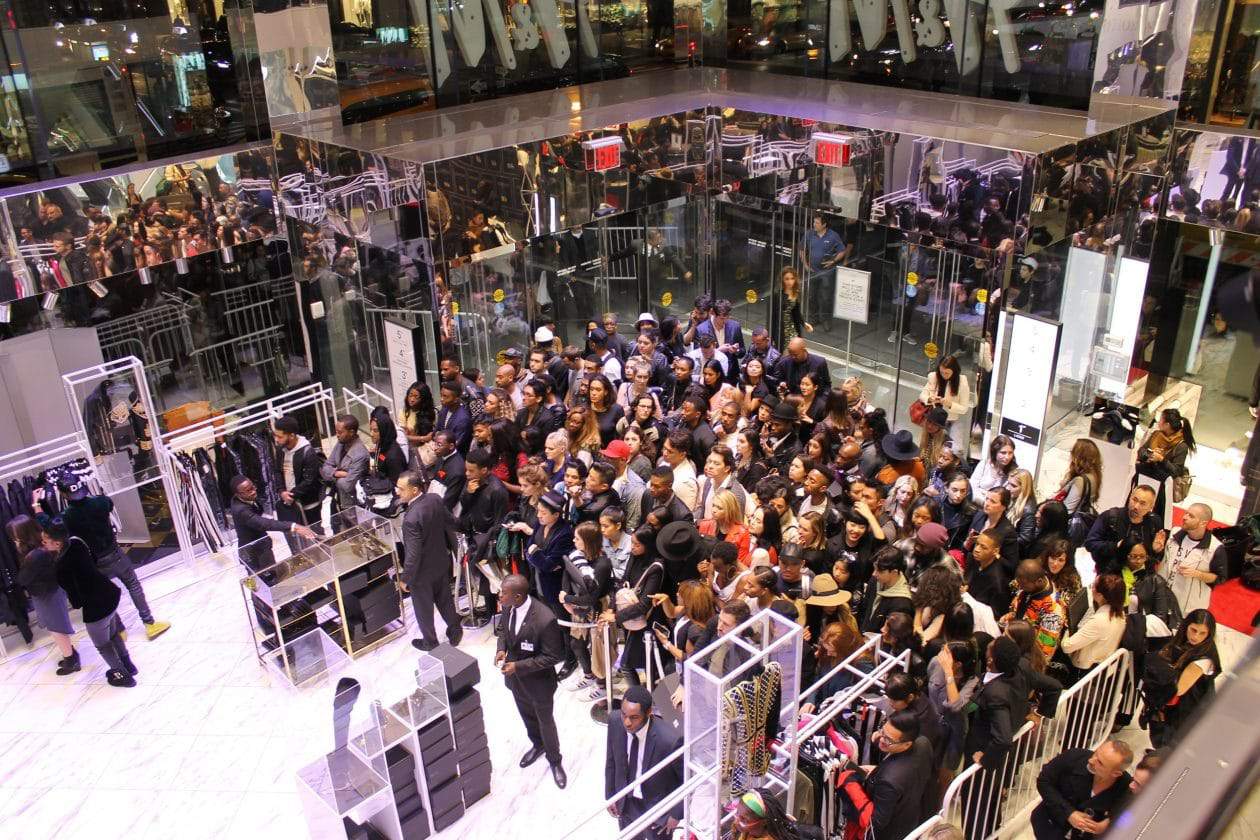 Finally the employees and security had had enough; they dragged barricades inside to block off the shopping area so people could safely restock the racks. Security attempted to only let a few people in at a time, and the crowd surged and pushed forward, craning to see what garments were still available. 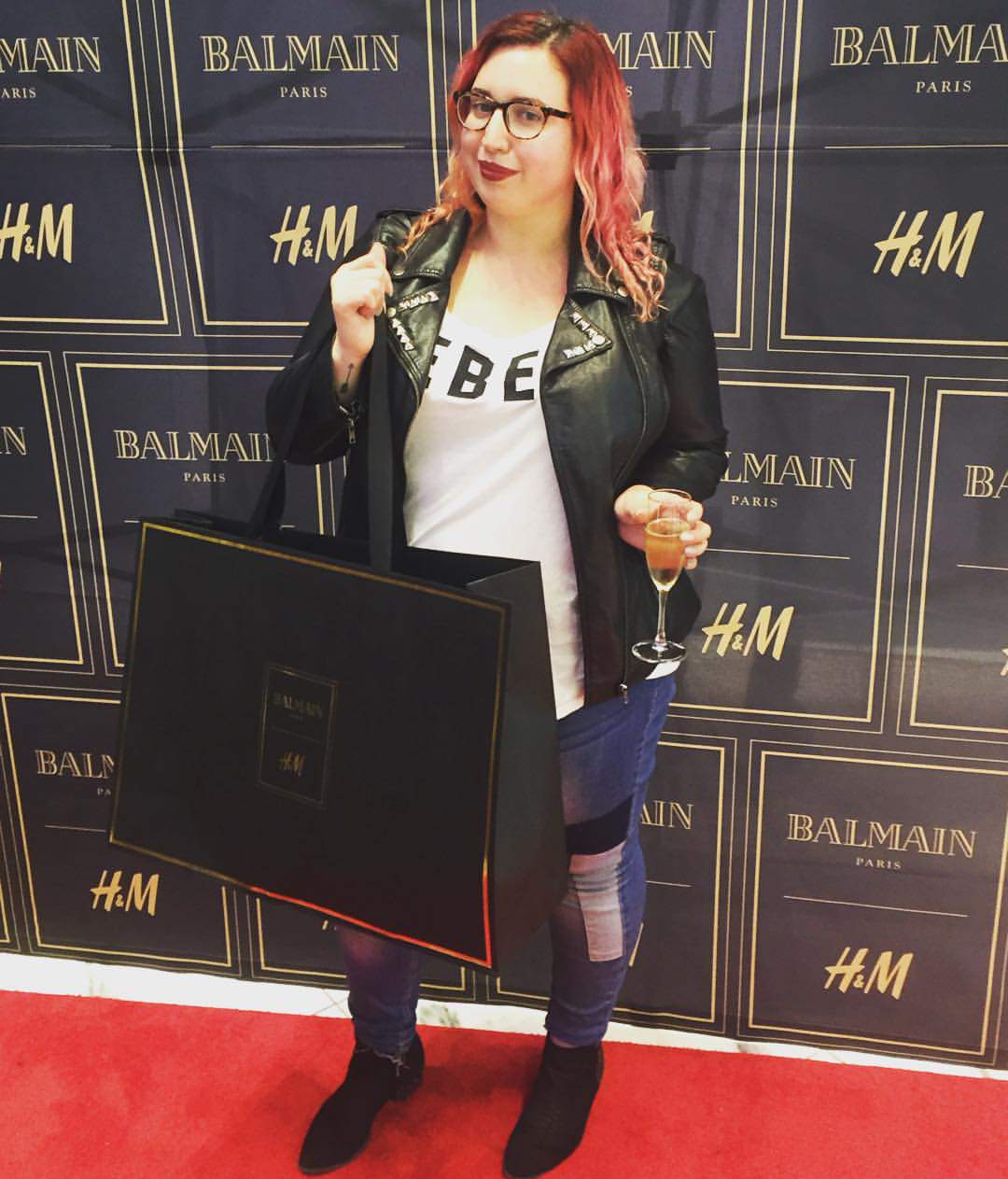 After a few glasses of champagne and some mini bites (literally mini, like teeny-tiny pizzas served in teeny-tiny pizza boxes half the size of an iPhone), we purchased our pieces. While watching the fray from above, I spoke with a member of H&M’s global team in charge of design collaborations. He eyed me and my giant shopping bag and inquired about my thoughts on the obviously successful collection.

Without holding back I told him, practically begging, to expand the size range of their designer collections. I, at a size 16, only had hope in accessories and the largest size in the men’s department, and many who are larger than me would easily be sized out of even the stretchiest items. I explained that we make up over 65% of the purchasing population, and would also line up in droves to get our hands on these designs. He seemed to sincerely listen to my requests and said he would discuss them in their next meeting, but of course, I wouldn’t hold my breath waiting for them to finally offer it in plus.

I think it will happen, but slowly, as things always tend to be for those who wear above a size 14.