At the most recent New York Fashion Week, a record-breaking 27 plus size models walked the runways! While I’m so excited to see high fashion become somewhat more inclusive, I still want to see more size and shape diversity from plus size fashion. That’s where Portland’s Unmentionable: A Lingerie Exposition really stood out this February.

Elizabeth Mollo Productions and Altar PDX presented Unmentionable: A Lingerie Exposition held at Portland’s McMenamins Mission Theater. The show, which donated a portion of its proceeds to Planned Parenthood Columbia Willamette, consisted of thirteen designers sending new lingerie collections down the runway, proactively including some plus size looks. Not only do I appreciate the existence of an ongoing, independent lingerie show, but also love the commitment to plus size inclusion. 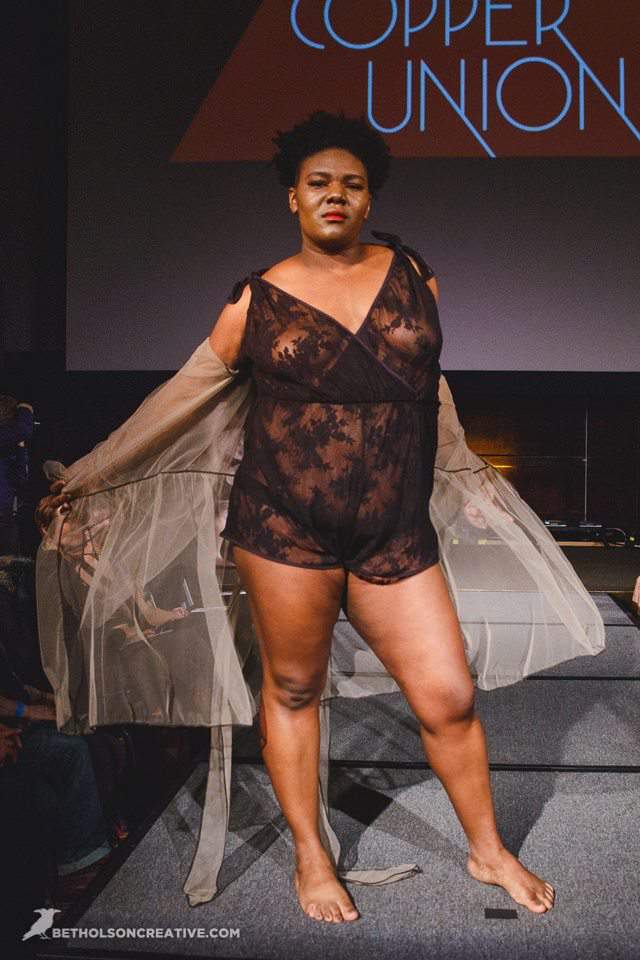 As soon as I saw the images from the show, I was struck, not only by how much I wanted to own these designs, but also because I didn’t have to imagine how this lingerie would look on my body. This year, two plus size focused designers, Chubby Cartwheels and Copper Union, used plus size models representing a range of sizes. Some of those models were also featured in size inclusive collections. These plus models weren’t all hourglass shaped either; they were apple-shaped, small busted and visibly plus size. This kind of plus size representation is still rare to see in images, but on a runway, it’s damn near unheard of!

I reached out to the two plus size designers, Shawna Farmer of Chubby Cartwheels and Claire Doody of Copper Union, to learn more about their collections. Both of these women design plus size fashion, but their lingerie collections show their versatility and clear understanding of the plus size body.

In addition to the designs themselves, it was important to both designers to show body diversity. “Since Claire and I were the only two designers who were strictly plus size, we decided together on the models,” says Farmer. “All of which are models we have been fortunate enough to work with a lot previously. And for both of us, Claire and I, we really try to showcase as much body diversity as we can with our shops.  It means a lot to us both.”

This year’s Unmentionable show marked Farmer’s third lingerie collection and Doody’s first. Both designers started designing lingerie specifically because the show’s organizers invited them. This really demonstrates the importance of a show like this. To reach out to plus size designers and let them know not only that they are welcomed, but also encouraged to participate alongside straight size designers is significant.

“I was asked to be the in show last year and I passed, because as I told them I didn’t make lingerie,” says Doody. “But then I attended the show and of course realized I could totally make lingerie however I pleased. I had placed silly limitations on myself about what lingerie consisted of, but I could make any type of lingerie.”

Doody’s collection for Copper Union brought in elements her ready-to-wear collections have been known for: interesting prints, sheer fabrics and skilled draping. But rather than showing these elements in the form of maxi skirts and shawls, she showed them in baby dolls and robes.

“I love using sheer fabrics, lace, mesh and other delicate fabrics in my ready-to-wear designing so really it seemed like a natural progression to move into lingerie,” says Doody. “I was excited to be able to play with textures and fabrics that I usually layer under things as the main piece.”

Doody says she felt more freedom designing lingerie than ready-to-wear. She reveled in the reveal, giving each model something to take off on the runway, and she fused modern design with vintage inspiration effortlessly.

“I drew inspiration from 1940’s lingerie fashion shows I found online,” says Doody. “I also love seamed stockings, so I wanted to play with some exposed seams and rolled hems. For myself when I am designing it truly it is fabric that inspires me the most. I am a very tactile person, so mixing lace with mesh, velvet and other sheer fabrics created a beautiful palette to work from.”

“This year I wanted to go for a more fun and flirty feel. Sexy casual. Like I picture people hanging out around the house, feeling sexy, feeling cute,” says Farmer.

One of the ways Farmer creates this casual aesthetic is through the use of custom elastic with her logo. Combining this black and white elastic with soft crushed velvets, Farmer blends hard and soft elements seamlessly. In addition to the pieces featured in the show, the collection will also include a longer leg, men’s style brief in crushed velvet.

“I am loving that the rolled elastic look is making a comeback on underwear and bralettes,” says Farmer.  “It just made sense to me that if I wanted to have a go with this style that I get custom elastic. I considered having it say Chubby Cartwheels but in the end was really happy I went with the plus signs from my logo instead.”

Although Farmer didn’t end up going with any wording on her custom elastic, her collection spoke volumes and her models made a clear statement about where she stands as a designer. At the end of the runway show, each of the Chubby Cartwheels’ models held up a protest sign related to current political issues such as “Clean Water for Flint” and “No Ban, No Wall.”

“I really just felt like I needed an outlet for my frustrations with everything going on recently,” says Farmer.  “And if you have an audience or a following you should use it to be vocal about what means a lot to you. So when I asked one of the producers from the show she gave me the green light and my models were more than up for it.  It worked out perfectly.”

Participation in fashion, especially when you’re plus size, is political. Existing in your fat body in a society that would rather you didn’t exist is still a radical action.  To see visibly plus bodies on any runway is progress and to see these visibly plus bodies wearing lingerie and holding political actions signs is a clear statement.

I understand Unmentionable: A Lingerie Exposition is not NYFW. The scale of these two productions are vastly different, but I think it’s important to note how indie designers can often be the spark for large scale change. I don’t think we would be seeing 27 plus models on the runway at NYFW without the work that fat activists and indie plus size designers have been doing for years to make plus size bodies more acceptable in the mainstream. And that’s why supporting what these designers are doing is so important.

Which pieces are your favorite from Unmentionable: A Lingerie Exposition?

Why do you think it’s important to see more visibly plus bodies on the runway?