Fashion and beauty are intimately tied to way we feel about ourselves and for artist Jonquel Norwood, her own self love journey took a major turn when she started doing plus size fashion illustrations less than a year ago. As we have shared quite a bit about plus size art, we hardly hear the story behind the plus size artist… Well, today, we take it a step further to chat a little bit with Jonquel Norwood! 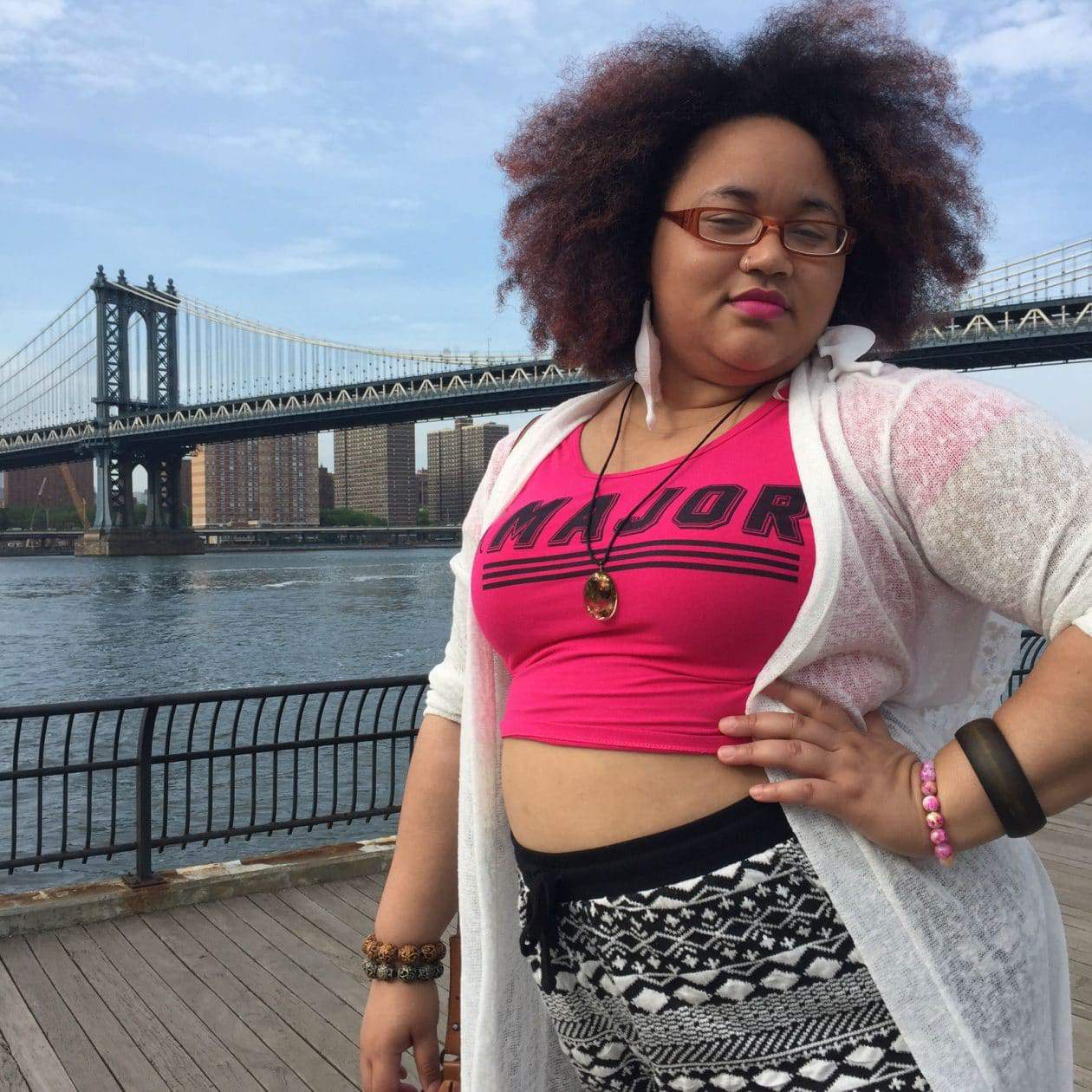 Although Norwood is new to plus size fashion illustration, she’s been drawing for as long as she can remember. She won her first art competition in kindergarten and when it came time to pick a career, she started studied painting at a local community college in her home town of New Orleans; that is until Hurricane Katrina hit in August of 2005. Katrina not only destroyed Norwood’s college but it displaced Norwood from her home for months. 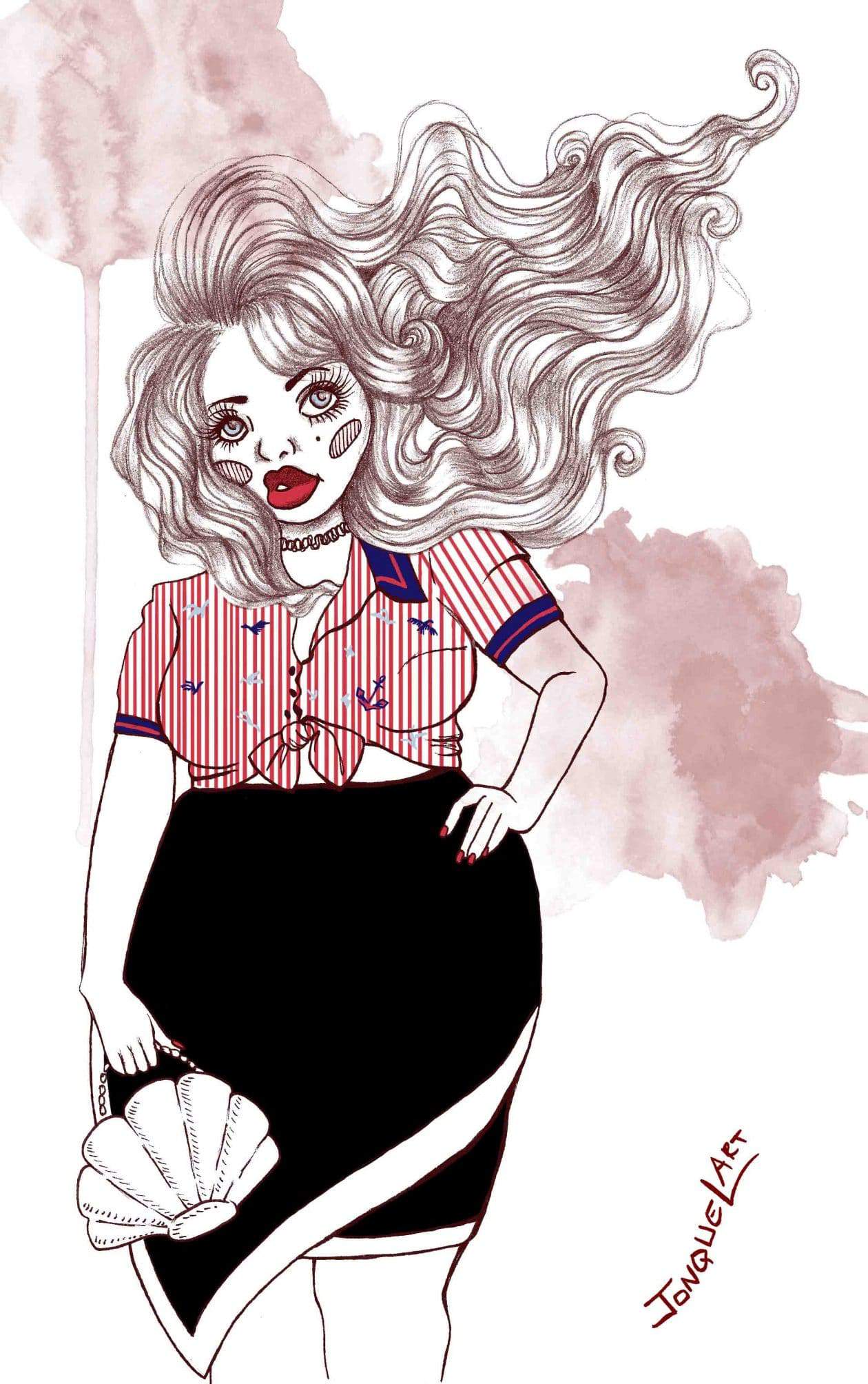 “We were gone from August to October,” says Norwood. “My house did not flood but the roof was blown off. Our neighbor’s full grown tree, from down the street, was in our backyard. It was a wasteland; I still get chills.”

It was during that time that Norwood says art was the only thing keeping her sane. But as with any tragedy, the aftermath was a lot for her to handle.

“I got tired of dealing with the aftermath of Katrina,” she says. “It wasn’t the same. I was too depressed about a lot of the changes. I got tired of seeing the waterline everywhere. I wanted something different. A close friend of mine passed away and I was like ‘I need to start my life. I can’t keep going in a circle over and over again.’”

So Norwood completed a college internship program with Disney before moving to Atlanta to go to school at Savannah College of Art and Design (SCAD). She moved to Atlanta before even getting accepted to the school on the good faith that this is where she needed to be. And when she started there, she realized that the hard work was just beginning. 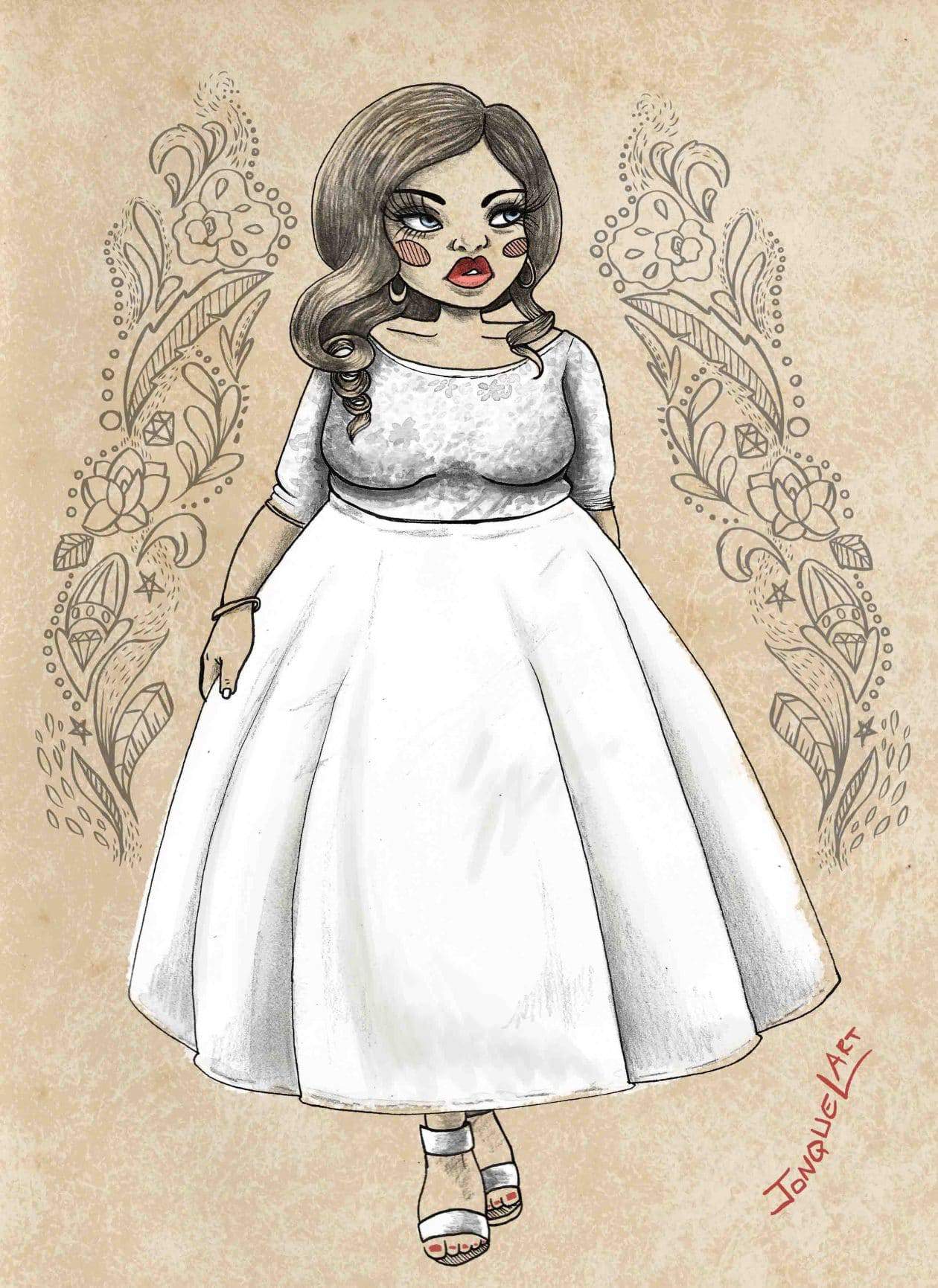 “Being at SCAD was really different,” says Norwood. “When you go to a regular college, I feel like people don’t really take you seriously when they find out you’re a fine art major. But when you’re in a school where everybody is a art major, that’s a big difference.

I realized how serious this was and how you can turn this into an actual business. SCAD wasn’t just about teaching you to be an artist, they were teaching you how to be a thriving artist. You had to learn not just the painting side but you had to learn the business side as well.”

While Norwood studied painting at SCAD, she learned a lot about how to draw the human form in all shapes and sizes, but she was still learning to become comfortable with her own body. One of her school projects was a self portrait that where she was wearing an extremely tight corset to show that the pressure to be thin was eating away at her.

Once she started learning more about plus size fashion, her mindset began to change. 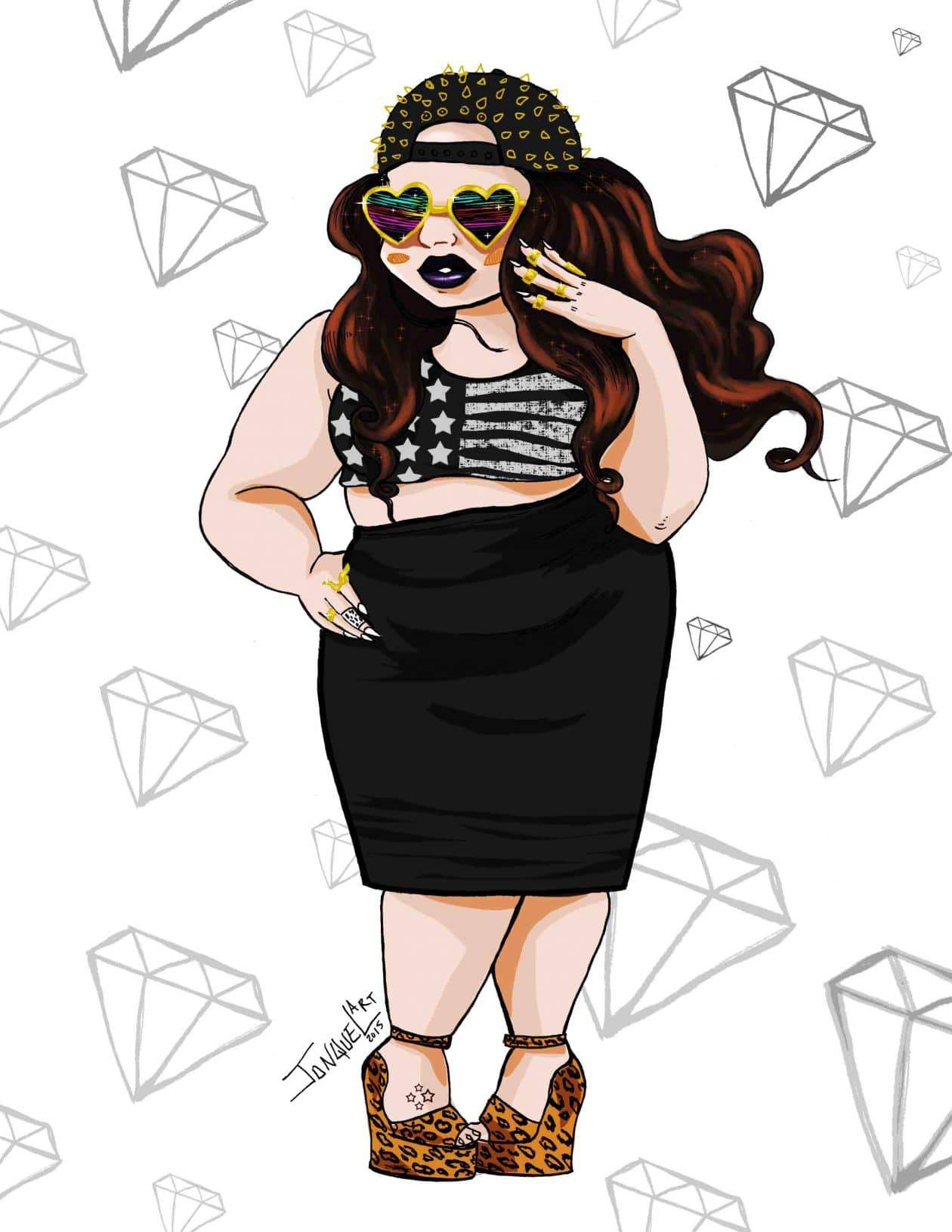 I first met Norwood in late 2013 when she stopped a friend of mine to ask where she got a pair of dinosaur earrings that I had designed and like so many people in the plus size community, we connected virtually through social media before eventually meeting in person in Atlanta. When I heard her story, I was instantly inspired and seeing her work, I was blown away by her talent.

Though she can do realism, her style is more graphic and influenced by her years of drawing anime, cartoon and comic book characters.

Her work was immediately identifiable which is something she told me she strives for. Over time, her work has stayed true to her originally style but the type of girl she draws has grown sassier as Norwood did too. Up until late last year, the women of Norwood’s drawings had hips and attitudes, but they were still straight size. 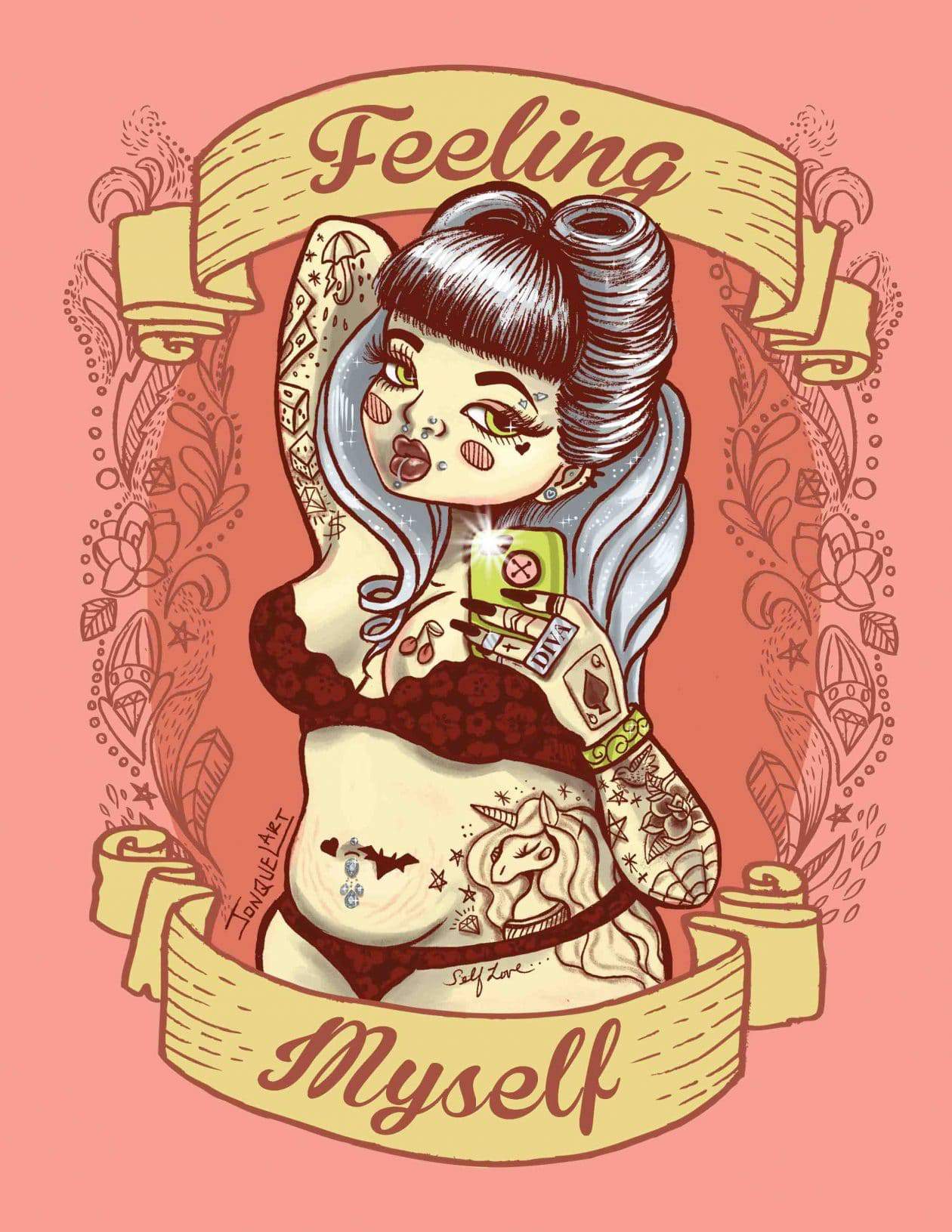 When Norwood moved to New York in late 2014, a personal experience would inspire her to do her first plus size illustration. A complete stranger walked up to her and asked her if she was pregnant. Norwood said this is something that has happened to her since high school but this time, she drew it.

“When I moved here, I kept a diary of things and I just drew that girl,” says Norwood. “I didn’t share it on Instagram because it was very personal to me at that point. It was something that I was always teased about. I would never dream of telling anyone that it happened.” 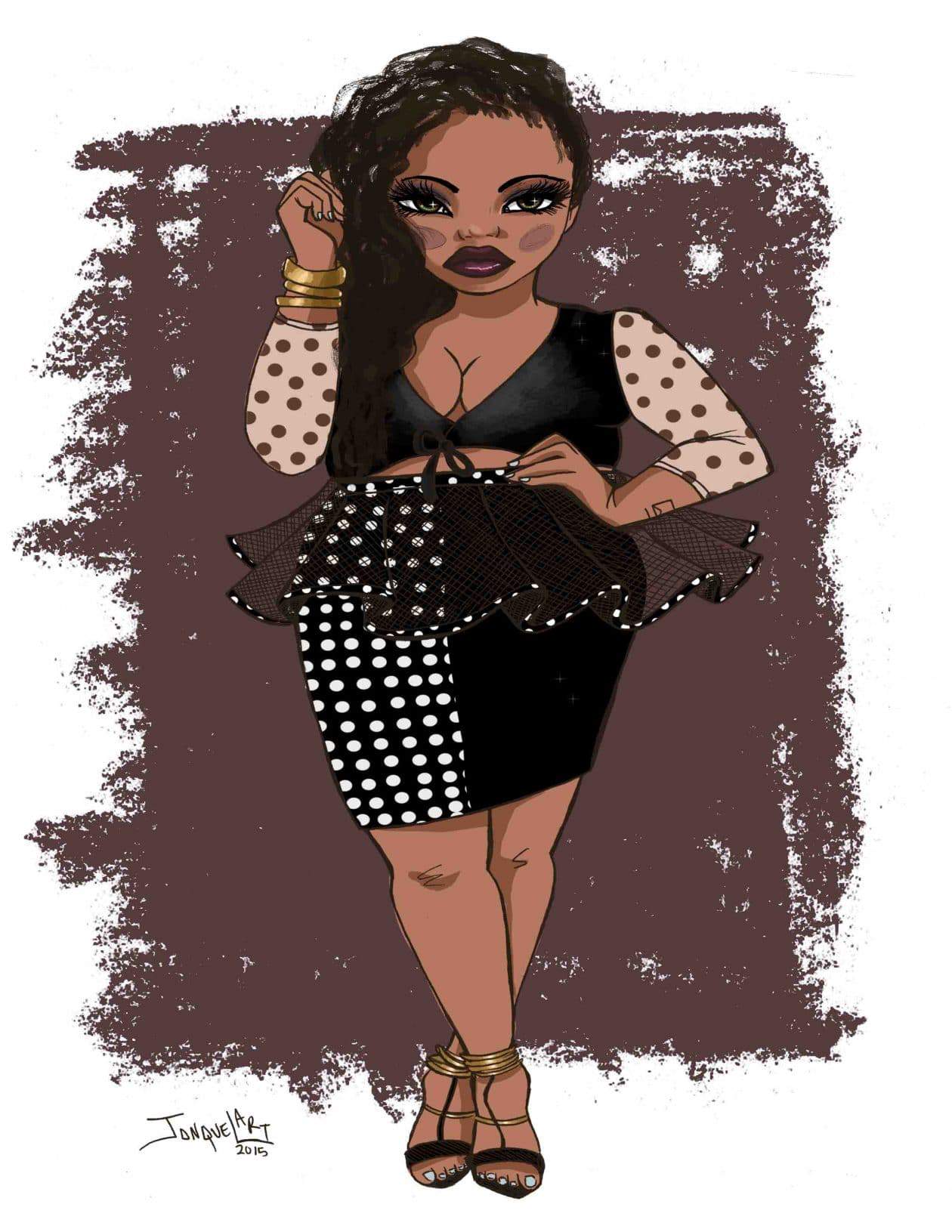 “It was an ‘eff you’ to everything I was told I couldn’t do,” says Norwood. “It was the first time I let myself out in a drawing before.  I put it on Instagram and I was so nervous about it but people went crazy for it. It was the first drawing I put out there that had almost 400 likes and comments. I thought, ‘did I hit a nerve somewhere?’” 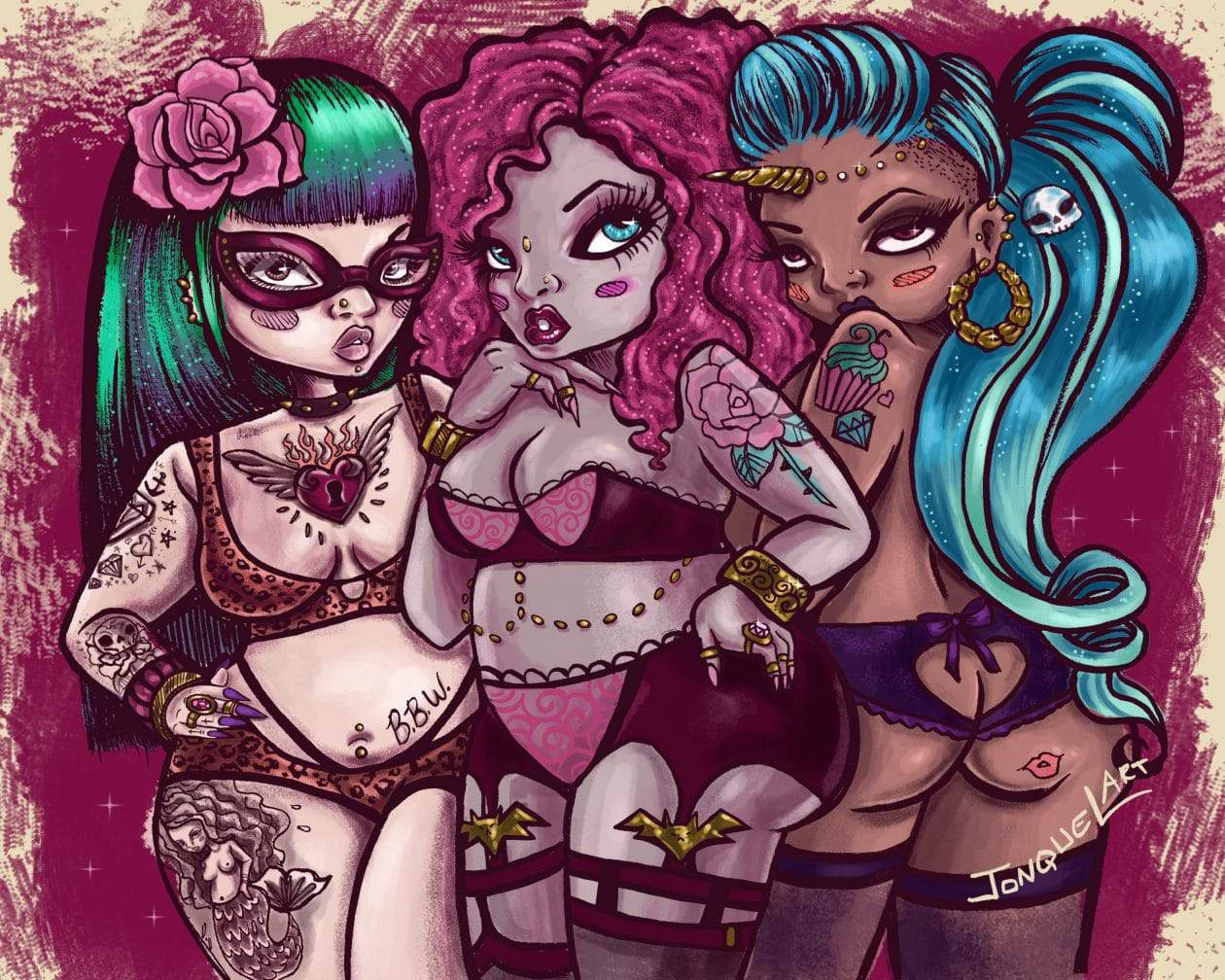 While there’s been huge buzz lately for body positive artists such as Rachele Cateyes whose work directly challenges beauty standards, tackles fat shaming and encourages activism. Both art and fashion have the ability to make people think. And when it comes Norwood’s illustrations, the biggest impact it had on changing someone’s mind was her own.

Although the change in Norwood’s subjects was not immediate, Norwood drew another plus size illustration at the urging of her husband and this time she included stretch marks. Norwood cites women like myself, model Essie Golden, and blogger Sarah Chiwaya of Curvily as role models who helped her see that plus size women could wear whatever they wanted. Overtime, Norwood saw a shift in herself where she says she didn’t feel like she had to hide anymore. 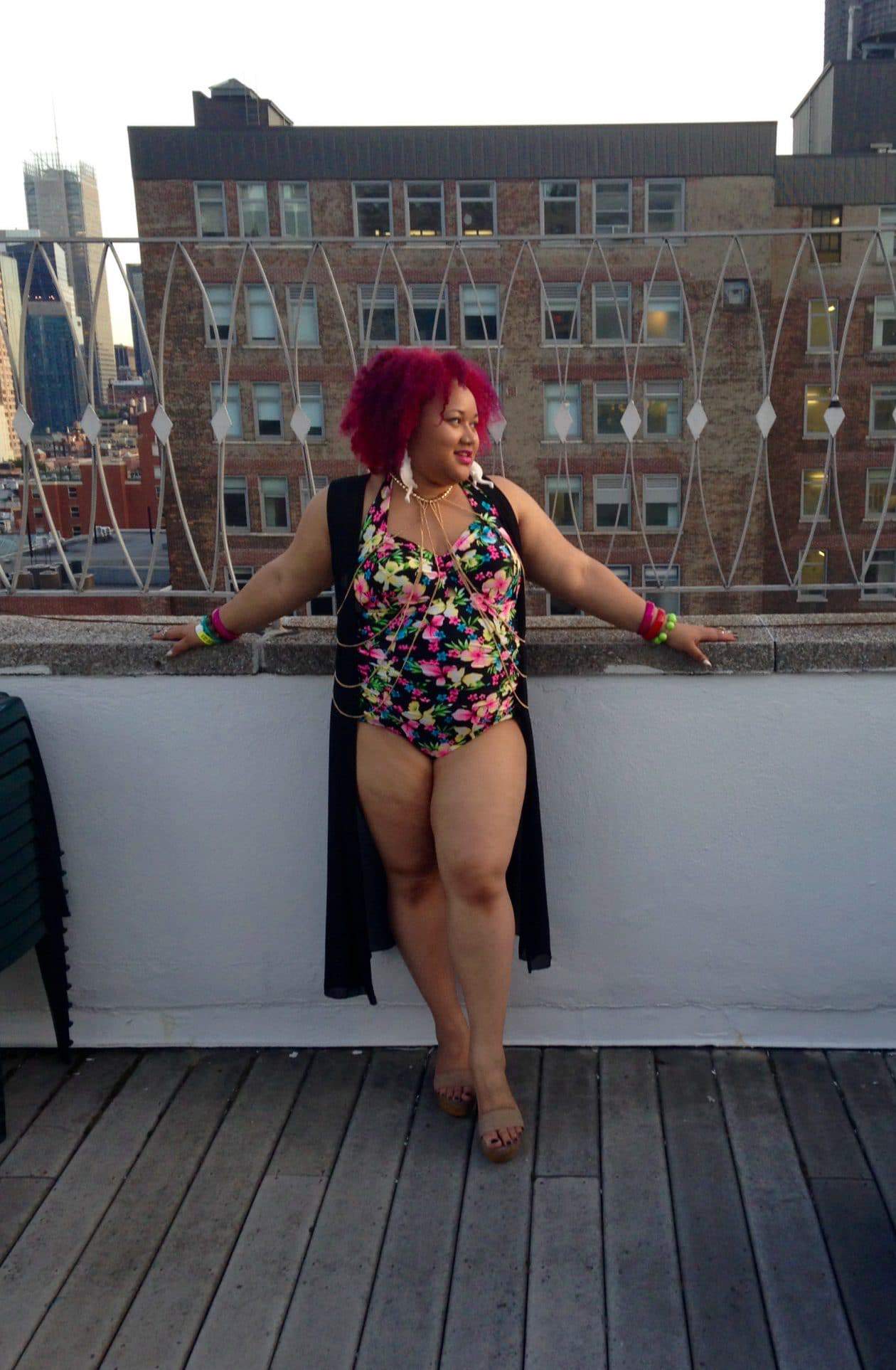 Drawing plus size women was a very personal journey for her because her art was tied to her own ideas of what is considered beautiful. When it came to learning how to draw plus size women, there was no guidebook; Norwood says everything she found on illustration focused on straight size.

She’s teaching herself by honoring the real life plus size women she admires. She’s not shrinking their waist or exaggerating their shape. She’s drawing these women as they are, down to the details.

“The more that I drew women that looked like me, I started to become more comfortable with myself,” says Norwood. “I started to see beauty where I never saw it before. Art is about that idolizing things especially with fashion illustration.

I really only draw things that I find beautiful or inspiring and by me drawing these bloggers, these illustrations, it gave me permission to love me because I loved what I was doing and I was like, ‘if what I’m drawing is beautiful than I’m beautiful because I look like what I’m drawing.’ It gave me more confidence, not just in my body but in art period.” 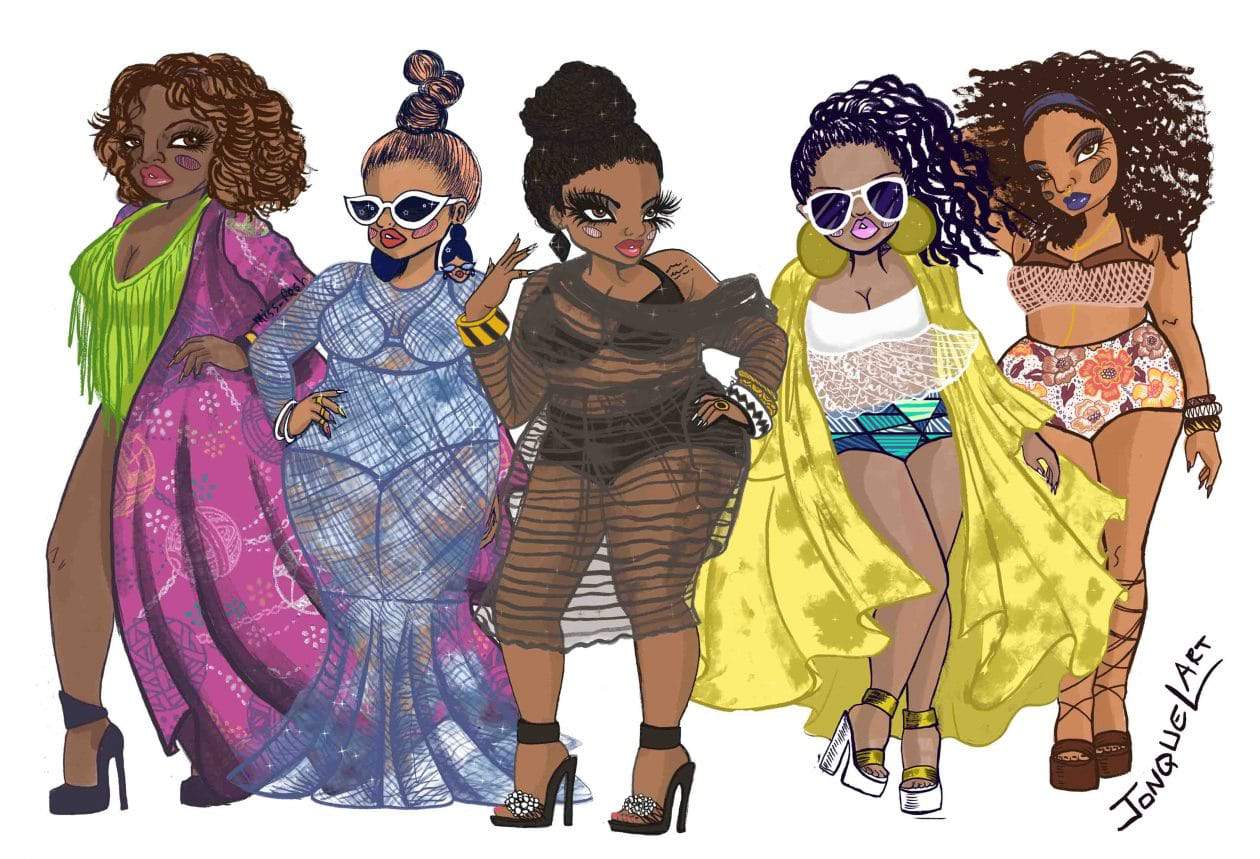 And when she attended Essie Golden’s Golden Confidence Pool Party in June 2015, she hit another major turning point in her own self love journey.

“The entire night was surreal for me,” says Norwood. “I didn’t know what to expect and I didn’t know anybody. The energy in the air was so positive and so happy that you could just tell that there were so many women that felt happy to just be free and show their bodies off.

I would’ve never exposed my legs before. My whole family was calling me saying, ‘you’re on the internet with a swimsuit on.’”

The event inspired one of Norwood’s popular illustrations, Golden Confidence which depicts popular plus size bloggers and designers. Bloggers like TCF’s own Marie Denee and Plus Model Magazine editor-in-chief Madeline Jones have also been subjects for Norwood’s illustrations. Norwood isn’t just stopping at creating art; like SCAD taught her, she’s selling it too. 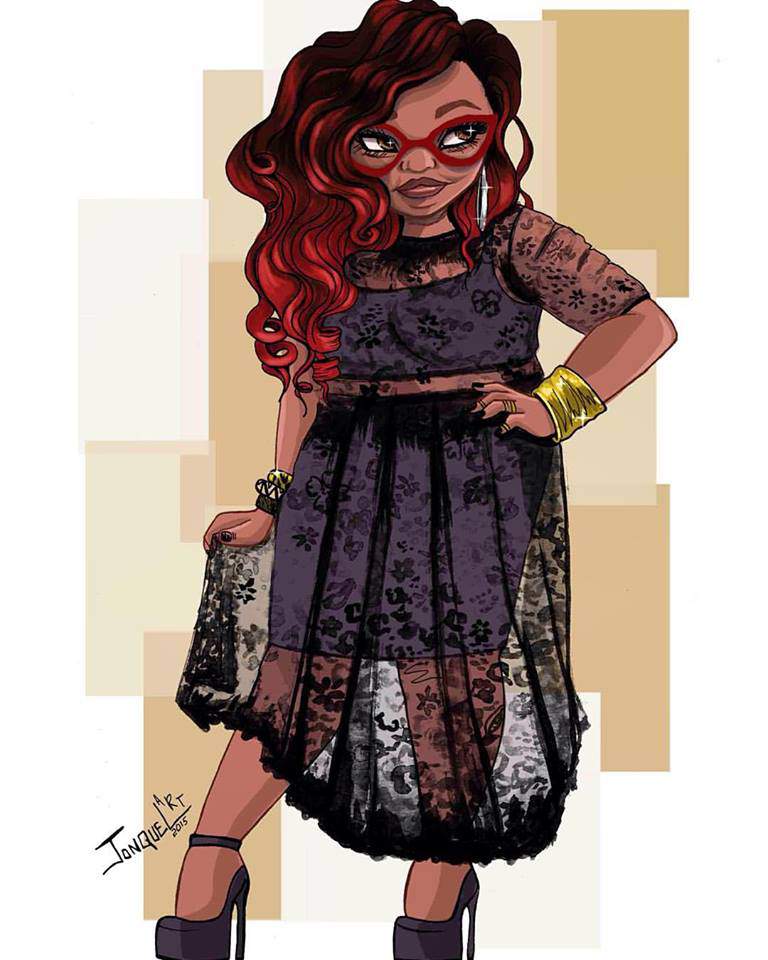 In addition to doing two art shows in November in New York, Norwood is selling  makeup cases with her popular drawings in her own shop and later this month the makeup cases will be sold in a boutique for the first time through my own site, Ready to Stare. Norwood also has plans to add her illustrations to coin purses, dog tags and eventually t-shirts.

Through her plus size art, she hopes to work with more plus size designers and get plus size fashion illustration as medium more exposure.

I’ve been lucky enough to witness Norwood’s growth over the past few years as not just an artist but also as a plus size women and it’s been truly a gift to watch. It’s clear that her move to New York has been a positive one. 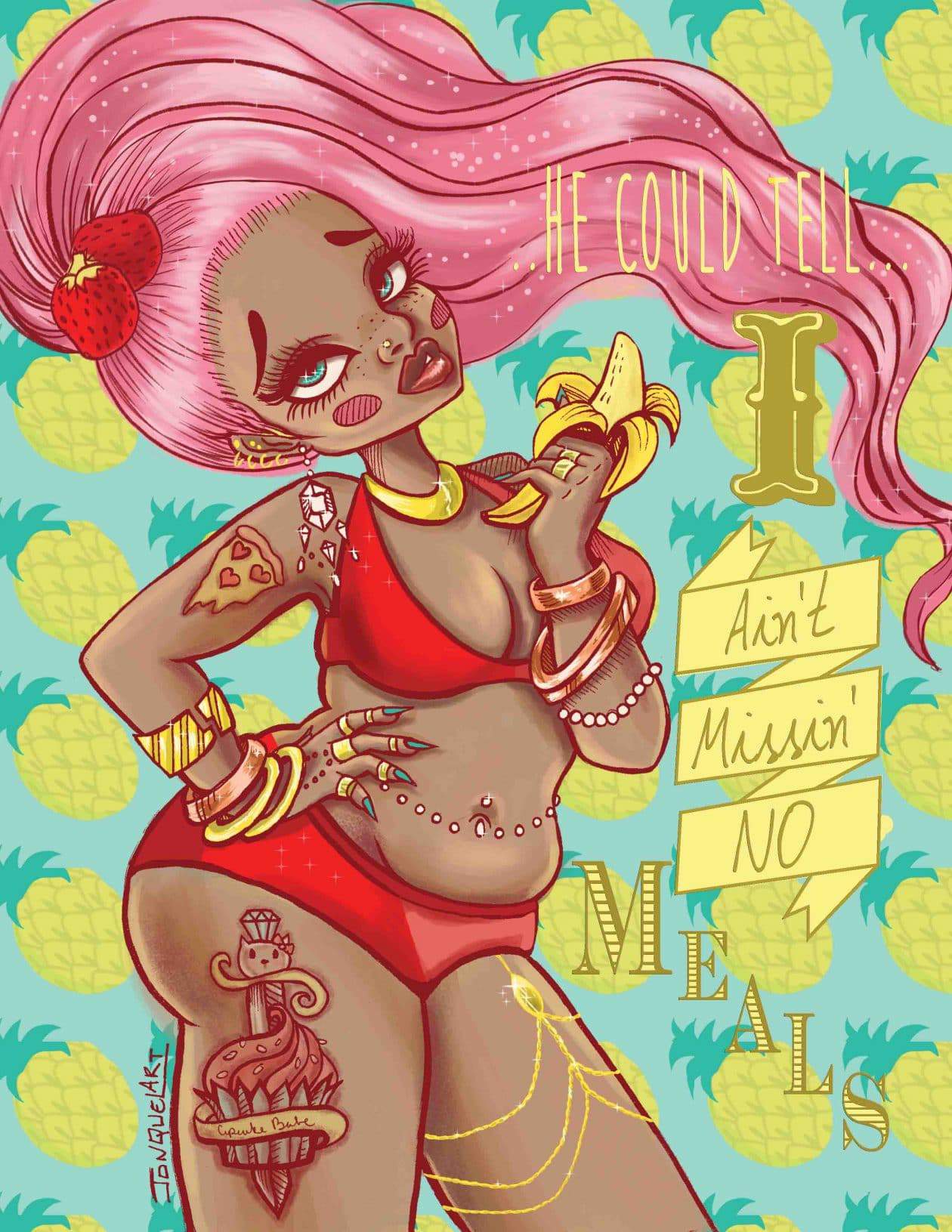 “In New York there’s a bunch of women here who don’t care what people think about them and wear what they want to wear,” says Jonquel Norwood. “I stood in the mirror for an hour before wearing a crop top for the first time. It’s been a journey and I’m still learning. I’m still trying to change the voices in my head from being toxic to not just accepting but celebrating.

I’m so tired of being victim to society and to my own mind. It’s been a tough journey but when I walk past the mirror, I like what I see.”

To see more of Jonquel’s art on her site: www.jonquel.com and you can find her on Instagram at @Jonquelart. 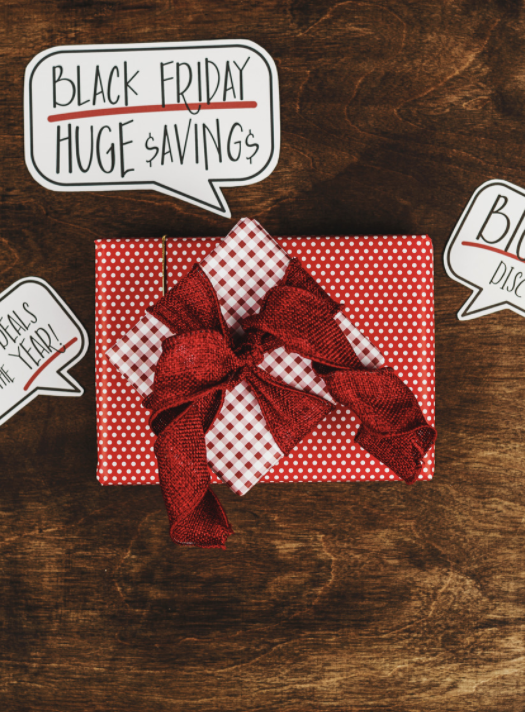